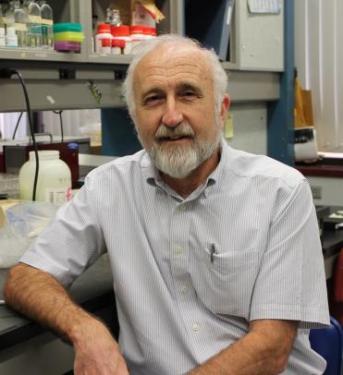 The underlying theme of Dr. Kolodrubetz’ lab’s research efforts has been to develop and use molecular genetic, genomic and biochemical approaches to elucidate the functions and regulation of virulence factors in periodontal pathogens.

The lab’s studies with Aggregatibacter actinomycetemcomitans (Aa) have mainly focused on leukotoxin, a virulence protein that helps the bacterium evade the host innate immune response. They have used comprehensive biochemical and genetic approaches to identify and characterize three DNA binding proteins that work together in a novel pathway to accurately regulate leukotoxin transcription in Aa. Microarray analyses have shown that these three transcription factors are global regulators, altering the synthesis of hundreds of genes (regulons) in Aa. Because “networking” is a critical concept in regulatory pathways, they are using whole genome technologies to determine how these three global regulatory proteins coordinate their activities to control the expression of multiple virulence genes in Aa.

More recently, Dr. Kolodrubetz’ lab has started a project based upon the observation that dozens of mRNAs are mis-regulated in a protein-deacetylase mutant of A. actinomycetemcomitans. Genetics, mass spectrometry and RNA-Seq are being used to prove our hypothesis that lysine de-acetylation of transcription factors by the deacetylase CobB plays a key role in modulating the transcription profile of Aa. Importantly, since CobB is an NAD+-dependent deacetylase, our results would also suggest that there is an interesting new connection between physiology (NAD levels) and transcriptional regulation (acetylation) in bacteria.

Finally, the lab has a long-standing collaboration with Dr. Larry Chu (Developmental Dentistry) investigating the pathogenic potential of the glutathione catabolic pathway in T. denticola. They have constructed a T. denticola mutant that cannot metabolize glutathione to H2S and are using it in in vitro assays and in a rat model of alveolar bone loss to test the hypothesis that a decrease in glutathione levels by T. denticola metabolism and the accompanying increase in H2S production will play key roles in periodontal disease pathology. Re-establishing normal periodontal pocket thiol-molecule homeostasis by inhibiting a bacterial catabolic pathway pharmacologically could be an innovative strategy to reduce host damage in periodontitis.