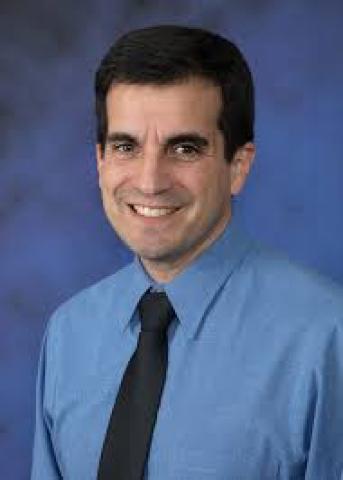 Dr. Rentería is an Assistant Professor of Physiology in the Department of Clinically Applied Science Education.  He was born and raised in San Antonio, Texas. He received his Ph.D. from the Interdepartmental Neuroscience Program at Yale University by working toward understanding mechanisms of activity-dependent development of the visual system in the laboratory of Dr. Martha Constantine-Paton, primarily using the retinotectal projection of developing tadpoles as a model system.  He did postdoctoral fellowship work in the laboratory of Dr. David Copenhagen in the Department of Ophthalmology at the University of California, San Francisco, in which he and the lab identified functions of inhibitory circuitry in the mammalian neural retina.

In 2008, Dr. Rentería returned to San Antonio to join the faculty of the Department of Physiology at University of Texas Health San Antonio.  While at UT Health San Antonio, he also began teaching muscle physiology in the integrated, learner-centered curriculum of the School of Medicine.  In 2014, he moved his lab to the UTHSA Department of Ophthalmology, where he and his lab are studying the pathophysiology of diabetic retinopathy under the auspices of an R01 research grant from the National Eye Institute of the National Institutes of Health (NIH).  At the same time, he also began teaching Pathophysiology in the School of Nursing’s undergraduate (BSN) program, which led him to realize and develop his burgeoning teaching aspirations.

While maintaining an adjunct appointment in Ophthalmology to continue his research and collaborations, he is dedicated to using active learning and evidence-based teaching practices in the classroom in his full-time educator role at the University of Incarnate Word’s School of Osteopathic Medicine, which he joined in January 2018.