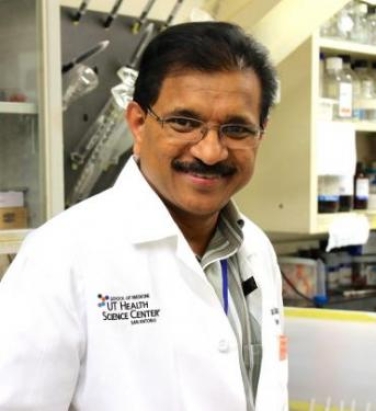 Cell death is an important mechanism in the pathogenesis of many diseases as well as homeostasis in adult tissues. Dr. Pothana Saikumar's research is aimed at elucidating the biochemical and molecular mechanisms of cell death that occurs in the context of hypoxia as well as cancer chemotherapy.

Mitochondrial outer membrane permeabilization, associated with most apoptotic stimuli, results in the release of apoptogenic proteins like Cytochrome c, Smac/DIABLO, and HtrA2/Omi from mitochondria and is regulated by both pro- and anti- apoptotic members of the Bcl-2 family of proteins. They have previously shown that hypoxia induces the translocation of Bax, a death promoting protein, from cytosol to mitochondria, followed by its oligomerization along with Bak protein in the membrane and release of cytochrome c from mitochondria to the cytosol.

Recently, a model involving mitochondrial fragmentation has been suggested as a complementary mechanism for mitochondrial outer membrane permeabilization.

However, their studies identified 15d-PGJ2, a product of inflammatory COX-2 during reoxygenation, inducing cell death with mitochondrial fusion preceding the death. They are currently studying the mechanisms involved in the dynamic alterations of mitochondrial shape associated with apoptosis.

Many cancers are resistant to classical drug/radiation therapies, which induce apoptosis. In this regard, they have identified compounds that could induce nonapoptotic cell death termed as cytoplasmic vacuolation death or paraptosis in apoptosis resistant cancer cells. They reported that upregulation and processing of autophagy marker LC3 is an important event in non-autophagic cytoplasmic vacuolation death. They are further exploring the signaling mechanisms of this novel death pathway as well as of its utility in treating therapy resistant cancers.

Molecular basis by which a tumor suppressive TGF-β signaling promotes tumor progression in advanced cancers is not known. They recently identified a TGF-β responsive gene TMEPAI (transmembrane prostate androgen-induced protein), whose expression is increased in several breast tumors. TMEPAI blocks TGF-β signaling through possible sequestration of R-Smads thus converting TGF-β from a tumor suppressor to a tumor promoter. Their current research explores the mechanisms by which TMEPAI alters TGF-β signaling and its role in tumorigenicity.