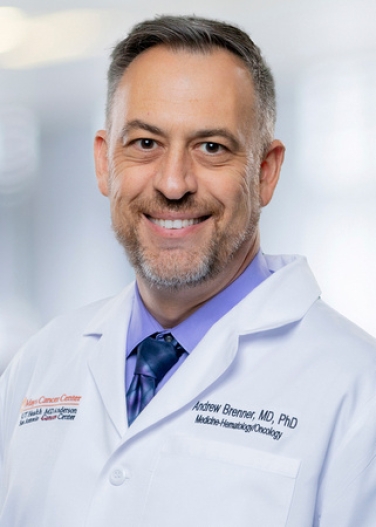 A specialist in both breast cancer and malignancies of the brain and spinal cord, Dr. Andrew Brenner not only focuses on clinical management, but also on the development of novel therapies to treat breast cancers and central nervous system tumors. A graduate of Texas A&M University, he earned his bachelor’s degree in biochemistry and went on to earn his doctorate in biological science and tumor biology at The University of Texas M.D. Anderson Cancer Center - Science Park. His doctoral thesis focused on the role of the cyclin dependent kinase inhibitor p16INK4a in mammary tumorigenesis and immortilization. Dr. Brenner’s current interests have transitioned from cell cycle to the effect of hypoxia on chemokines and escape from antiangiogenics and the role of obesity in promoting breast tumorigenesis. Dr. Brenner received his medical degree from the Texas Tech University Health Science Center and completed a residency in internal medicine at Scott and White Hospital in Lubbock. He completed his fellowship in hematology and medical oncology at the UT Health San Antonio.