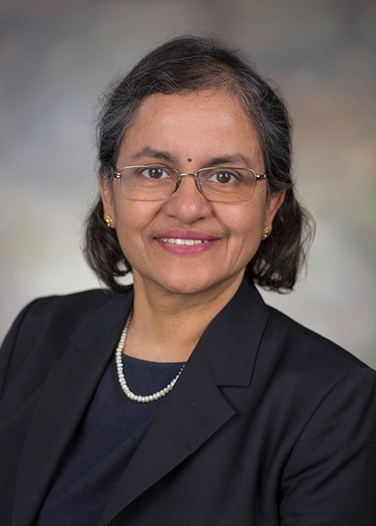 Interests: Alzheimer’s disease, dementia and the genetics of stroke and vascular brain injury.

She is a senior investigator for the seminal Framingham Heart Study, has had peer reviewed research continuously funded by the National Institutes of Health for 10 years, and currently serves as the principal investigator on eight NIH U01 or R01 grants.

She has lectured extensively, nationally and internationally, on Alzheimer’s disease, dementia and the genetics of stroke and vascular brain injury.

Dr. Seshadri enjoys a superb reputation in both science and clinical care and is a recognized thought leader in Alzheimer’s disease having recently co-authored position papers disseminated by the National Academy of Sciences on Preventing Cognitive Decline and Dementia: A Way Forward, and by the American Heart Association with a paper titled Defining Optimal Brain Health in Adults.

In addition to her title as founding director of the Glenn Biggs Institute, Dr. Seshadri is a professor of neurology in the Joe R. & Teresa Lozano Long School of Medicine with secondary appointments in the Departments of Psychiatry and Cell and Integrative Physiology.