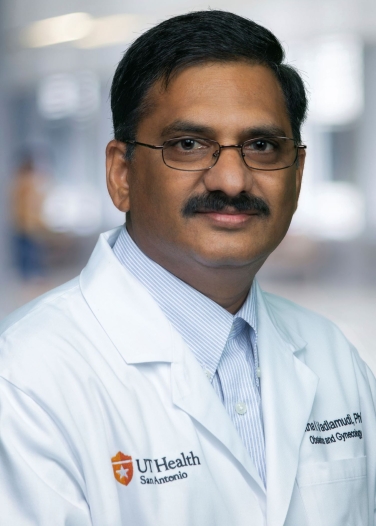 Dr. Vadlamudi joined our faculty in January 2006. In 1994, he graduated with a doctorate in molecular biology from the University of Wyoming in Laramie, Wyoming. In 1997, he finished his post-doctoral fellowship at Harvard Medical School/Dana Farber Cancer Institute. He has held academic positions as Assistant and Associate Professor at the MD Anderson Cancer Center's Department of Molecular and Cellular Oncology and Associate Professor at the Stanley S. Cancer Center/Department of Genetics in New Orleans. In September 2010, Dr. Vadlamudi was granted tenure as a professor, and he currently holds the Tom C. and Patricia H. Frost Endowed Chair for Cancer Research and Education. He also leads the Mays Cancer Center's cancer development program and is the MD, PhD program's Associate Program Director. For his remarkable contributions to the field of cancer molecular biology, he was chosen as an AAAS Fellow in 2015. His current research focuses on the characterization of novel oncogenes and tumor suppressors, endocrine therapy resistance, the development of novel cancer therapeutics for breast, ovarian, endometrial, and gynecological malignancies, as well as estrogen signaling in these diseases. His work aims to use laboratory-based discoveries to create new therapies for the treatment of women's cancers. His research is funded by grants from the Department of Defense, the National Cancer Institute, and the VA Merit Award. Dr. Vadlamudi serves as the Vice Chair for Research in the Department of Obstetrics and Gynecology.