Dr. Doug Frantz is a tenured associate professor in the Department of Chemistry at The University of Texas at San Antonio.

Dr. Doug E. Frantz was born in Kettering, Ohio in 1971. He obtained his B.S. in chemistry in 1994 at Stephen F. Austin State University in Nacogdoches, Texas under the guidance of Dr. James Garrett.

In 1998, he received his Ph.D. degree in organic chemistry at Texas A&M University in College Station, TX under the supervision of Dr. Dan Singleton where he worked on the synthetic and mechanistic studies of carbometalations reactions.

He then moved on to do a postdoctoral fellowship with Dr. Erick Carreira at the ETH-Zürich in Zürich, Switzerland where he discovered and developed the asymmetric addition of zinc acetylides to aldehydes. In 2000, he joined the Department of Process Research at Merck & Co., Inc. in Rahway, NJ where he worked on the development of practical and efficient syntheses to various drug candidates in Merck’s pipeline.

In late 2001, he moved to a new Merck site in Wayne, PA where he continued to work in the area of pre-clinical drug development and process chemistry. With a desire to return back to Texas, late in 2005 Dr. Frantz joined the faculty in the Department of Biochemistry at the University of Texas Southwestern Medical Center at Dallas as a research assistant professor and director of the Synthetic Chemistry Core Facility. He is currently an associate professor of chemistry at The University of Texas at San Antonio, San Antonio, TX. 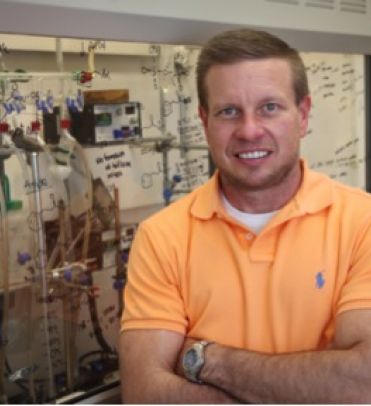