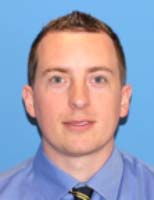 Major Tyler Hawkins was born in Garden City, Kansas. He attended the University of Kansas in Lawrence, Kansas from 2002-2006 where he earned a B.A. degree in Human Biology. He served as a Second Lieutenant in the Air Force Reserves while attending dental school. He graduated from the Arizona School of Dentistry and Oral Health, A.T. Still University in June 2011. He graduated from the Advanced Education in General Dentistry residency at Nellis AFB, Nevada in August 2012. He has since served at Andersen Air Force Base, Guam and Misawa Air Base, Japan before beginning the Endodontics residency at Lackland Air Force Base, San Antonio, Texas. Tyler married his wife, Yuka, in February 2017.