Grice created the course for interested Occupational Therapy students. Make no mistake—this is one class not found in the official course catalog. Rather, it’s something Grice offers because she loves clowning and firmly believes occupational therapists are great at it.
“It’s addicting, once you start doing it,” Grice said.

In addition to the nuts and bolts of performing, Grice teaches her students how to apply makeup, put together a costume and explore their characters. They end the class with a performance on campus for fellow students and faculty.

Grice, who performs as Tutti Frutti, began teaching interested students how to clown last year. This spring, she is working with a second group of students.

Kristen Barnes, OTR, graduated in December 2017 and took Grice’s class last year. Barnes performs as Teeter and the egg hunt was her first public performance. She described one experience there that she said demonstrates how occupational therapists are trained to be adept at approaching and building rapport with all people.

“One family I approached had a sibling with them, whom I greeted and offered a sticker. She didn't respond. Mom informed me she has autism and is non-verbal,” Barnes recalled. “I said, ‘That's okay, we are all OTs!’ It clearly put mom at ease; she actually let out an audible sigh of relief. And I knew exactly how to interact with her daughter at a level and pace which made the whole family enjoy the moment. With OTs the disabilities disappear and everyone is treated as an individual.” 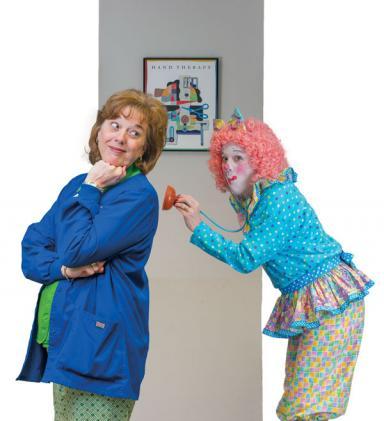