"It means a lot," said Restrepo, M.D., RT, FAARC. He received his first Kudolo Award 10 years ago and said he and other faculty continue to be inspired by the award's namesake, interim chair of the Department of Health Sciences George Kudolo, Ph.D., FAIC, FACB.

"He' s been an inspiration to all of us at the School who want to pursue any research initiative," Restrepo said.

Restrepo's research interests include humidity and oxygen therapy, ventilator alarm settings, interpretation of ventilator graphics, clinical simulation and critical care airway assessment. He places a priority on mentoring students encouraging them to discover the value of research. His ultimate goal is for students to present their research at an international conference.

His efforts have not been wasted, as noted by Richard Wettstein, MMEd, RRT, FAARC, in the letter he wrote nominating Restrepo.

"In addition to his own research projects, Dr. Restrepo has mentored over twenty student research projects over the last four years," wrote Wettstein, who also is interim program director and associate professor in the Division of Respiratory Care. "Seventeen of these projects have been published in "Respiratory Care" and presented at the Open Forum of the AARC International Congress."

Wettstein noted that Restrepo also secured grants to for students travel to present their projects and noted that "the number of projects accepted for publication and poster presentations at the national an international level during this period far exceeds that of any prior period since the inception of the program."

In his nomination letter, Wettstein also referenced Restrepo's service as a mentor for research at two respiratory care programs in Colombia and his strong publication history. 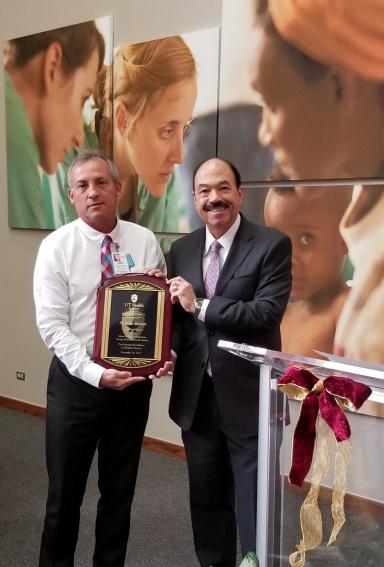