Linda A Smith, Ph.D., MLS, BB (ASCP), retired medical laboratory sciences professor has been granted the status of Professor Emeritus following almost four decades of service on the faculty of the School of Health Professions.

The UT System Boards of Regents voted in November to grant the designation. George Kudolo, Ph.D., FAIC, FACB, interim chair of the Department of Health Science, presented the certificate to Smith on Dec. 7.

Dr. Smith, whose specialties include immunohematology, parasitology, and mycology, retired in August. She said she plans to remain professionally active on a number of national boards and within various organizations.

Dr. Kudolo credited Dr. Smith with raising the profile of the School by serving as president of the American Society for Clinical Laboratory Science.

"By virtue of that, she put our name on the national stage," he said.

Dr. Smith served as department chair from 2009 to 2015 and received numerous state and national educator awards. A Distinguished Teaching Professor, Dr. Smith also was named a Piper Professor in 2007 and received the Regents' Outstanding Teaching Award from the UT System.

Teaching excellence is not achieved in a vacuum, she said.

Dr. Kudolo described Dr. Smith as a dedicated teacher who regularly updated her courses and received top evaluations from students. Dr. Kudolo invited Dr. Smith to lecture in his class this fall, something he plans to continue. 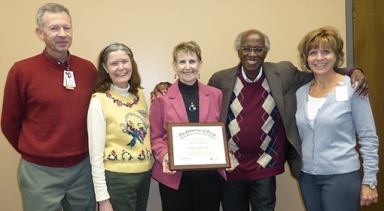