The clinic began in early July with individual diagnostic evaluations for children ages 3 to 13 in the areas of speech-language delays and disorders, speech sound disorders and social communication disorders. The evaluations were followed by the following clinics:

Graduate students worked alongside speech-language pathologists at the clinics, said Angela Kennedy, SLPD, CCC-SLP, assistant professor and clinical coordinator of the Speech-Language Pathology program in the Department of Communication Sciences and Disorders.

“We hope to be able to learn from this and expand this program in the future as a summer offering,” said Kennedy, who noted that the clinic is the first of its kind to be held at UT Health San Antonio. “A lot of our patients who come to this clinic can’t attend the traditional summer experiences.”

“A parent said, ‘Whatever you are doing in the morning, we are seeing it last all day,’” Kennedy said.

“The planning from the ground up was one of the hardest challenges, but adapting on the spot to unforeseen circumstances was even more of an invaluable skill that I know will come in handy as a future speech-language pathologist,” she said.

Graduate student Amber Arredondo served as graduate student clinician for the Interact clinic and worked with a child who used an iPad app to communicate.

“My client was able to use the device to initiate greetings, state wants/needs, and participate in clinic activities,” Arredondo said. “This clinic has cemented in my mind that speech-language pathology is one of the best jobs in the world, and I have been blessed to be part of an amazing new program.”

Graduate student Audrey Gilmore said her experience at the clinic has given her valuable skills she will be able to use in any therapy setting.

“Every person has the right and needs to communicate their wants and needs, which is why helping clients build their functional communication skills has been particularly enjoyable for me,” she said.

In other news, the department in June hosted a free advanced training workshop on childhood apraxia of speech (CAS) that drew attendees from all over the country, Kennedy said.

Funded by Once Upon a Time Foundation, the two-day workshop featured Edythe Strand, Ph.D., CCC-SLP, emeritus professor in the Mayo College of Medicine and an internationally recognized expert in CAS.

“The diagnosis of CAS can be hard,” Kennedy said of CAS. “The treatment is different than for the traditional speech sounds disorders. It’s a disorder that requires intensive therapy and a knowledge of how the motor system works.”

The workshop is one example of the University’s commitment to community engagement, she said.

“I think that’s also through engaging with the professionals who will be supervising and training our students and ensuring the community is still actively engaged in the development and growth of the evidence-based practice,” she said. 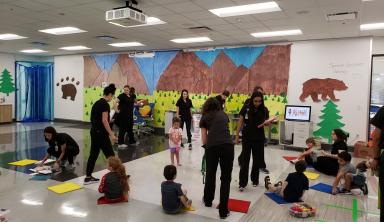