“Never in my wildest dreams did I think I would end up where I am now,” said Lt. Col. Gerardo Ramos, U.S. Air Force Interim Department Chair, Diagnostic Services and Program Director of the Medical Laboratory Apprentice Program at the Medical Education and Training Campus at Joint Base Fort Sam Houston and UT Health San Antonio Department of Medical Laboratory Sciences alumnus.

Ramos is a first-generation college student. Following the military, he attended The University of Texas at San Antonio for his undergraduate degree, but it was at UT Health San Antonio where he found his passion, “The instructors gave me a passion for learning…they really invested in you,” he said. Since then he has earned two master’s degrees and a doctorate.

In addition to overseeing eight programs as Interim Department Chair, the medical laboratory sciences graduate also teaches forensic toxicology to medical professional at Joint Base San Antonio and military lawyers all over the country. He has also served as a Forensic Toxicologist for the Armed Forces Medical Examiner System and continues to work as a consultant.

Along with 21 years of military service, Ramos’ recently passed the American Board of Forensic Toxicology board certification exam, an accomplishment he credits to his passion for education learned at UT Health San Antonio and his wife and children as they have been his inspiration throughout this journey. 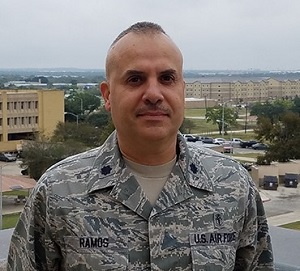 “Never in my wildest dreams did I think I would end up where I am now."