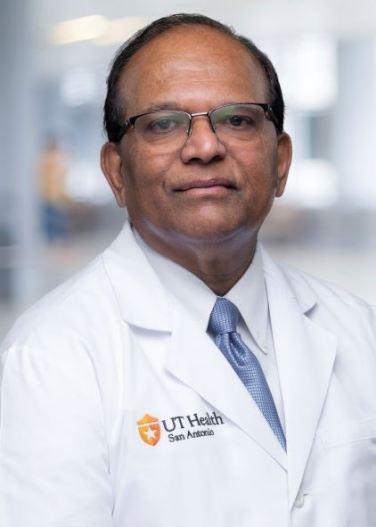 Deepak Kamat, MD, PhD, is professor of pediatrics, and the vice chair for academic affairs for the Department of Pediatrics at UT Health San Antonio. Dr. Kamat Received his MBBS degree and PhD Degree from University of Bombay, India and his Diploma in Child Health from the College of Physicians and Surgeons, Bombay, India. He completed his residency in Pediatrics and fellowship in Clinical Immunology and Bone Marrow Transplant from the University of Minnesota. Dr. Kamat served as the Director of the combined Medicine/Pediatrics Residency program at the University of Minnesota and as the director of Pediatric Residency Program, Vice Chair for Education and Designated Institutional Official at the Children’s Hospital of Michigan.  He developed the Global Health  Pathway and the curriculum for Global Health  at the University of Minnesota and for the Children’s Hospital of Michigan. He also developed a common academic curriculum and course for subspecialty pediatric fellows.  He has been honored with “Teacher of the Year” awards by residents on multiple occasions. In 2003 he received the “Clinician of the year Award” from West Virginia School of Medicine.  In 2007, he received the College of Medicine Teaching Award from Wayne State University and in 2009 he received the Wayne State University Board of Governor’s Faculty Recognition Award. In 2010 he received the “National AAP Education Award” and in 2012 he received the Excellence in Teaching Award from the President of Wayne State University. Dr. Kamat was the member of the Pediatric Review Committee of ACGME from July 2011 through June 2017 and during the last 2 year of his tenure he served as the vice chair of that committee. Dr. Kamat is active in multiple national and international medical societies. Currently, he serves on the planning committee for the National Conference and Exhibition of American Academy of Pediatrics.   He has authored and co-authored over 250 peer-reviewed manuscripts, review articles, book chapters and case reports. He serves on the editorial board of three journals and is an ad hoc manuscript reviewer for many journals.  He is editor of the American Academy of Pediatrics’ first textbook of pediatrics “Textbook of Pediatric Care” and also the Editor-in-Chief for the Pediatric Care Online, an on-line clinical resource of AAP, and editor-in-chief of Quick Reference Guide to Pediatric Care. He is co-editor of the “Textbook of Global Child Health” and “Common Cardiac Issues in Pediatrics”. He is the editor for “The challenging cases in Pediatric Diagnosis”. He is the editor-in-chief of the Newsletter of the International Pediatric Association. He is the co-editor of “Benign Hematological Disorders in Children: a clinical guide” published by Springer-Nature in August 2020. He was funded by Nationals Institutes of Health to develop HIV educational programs for High-School students in Goa, India and was a principal investigator of NIH grant to study the effects of music in children undergoing MRI scans. He has successfully mentored a large number of students, residents, fellows and faculty. He enjoys bedside teaching and conducting board reviews for students and residents.