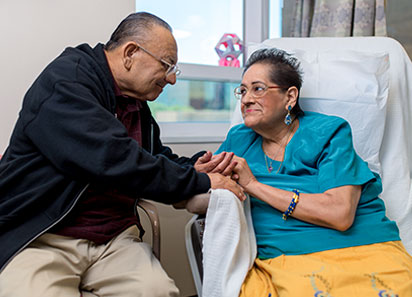 Margarita Duran faithfully rode the city bus to her doctor appointments. She’d beat breast cancer in 2012 and pancreatic cancer in 2014 and was determined to keep fighting. Her husband, Robert, accompanied her every time despite his own health challenges and medical disabilities. Neither could drive. Married for 43 years, the couple was inseparable.

But in October 2014, their life’s journey took a frightening detour to an emergency room where doctors told them Margarita would have only three months to live. CT scans revealed advanced-stage cancer in her stomach.

“We both cried a lot that day,” Margarita said. “If it was my time to go, we had to accept it.” But she said God had a different plan. Doctors soon referred her to the UT Health San Antonio Cancer Center where she began a series of three different chemotherapy regimens channeled directly into the tumors in her stomach.

Physically drained from the aggressive cancer treatments, Margarita became worried when she learned that her medication prescriptions were more than $2,000. For the retired couple on a fixed income, the cost would be impossible to cover.

Because of generous donors, the cancer center’s Patient Assistance Fund immediately came to Margarita’s aid. Funds helped pay for her medications and provided Margarita with transportation to and from her home so she and her husband wouldn’t have to ride the bus to appointments.

“After my therapies, the nurses at the cancer center even gave us bags of groceries so we could take home. Everyone at the center is an angel,” she said. “They lifted us up when we were down when we needed help the most.”

Today, Margarita’s tumor has ceased growing and she said she’s feeling much better.

“I’m here a year later because of my faith and people who really care about me – my husband and my doctors and nurses. They are my cancer center family.”

For more information and to support the UT Health Cancer Center Patient Assistance Fund, visit our giving portal or contact Sheri Ortiz, Senior Director of Development, at ortizs8@uthscsa.edu or 210-450-5512.