"It's a small world after all." That popular phrase holds significant meaning and hope for Henry Grun, a local attorney. He is forever linked to a place that is world renowned and recognized for connecting people around the world to innovative lifesaving therapies. That place is the IDD – the Institute for Drug Development at the UT Health San Antonio Cancer Center. 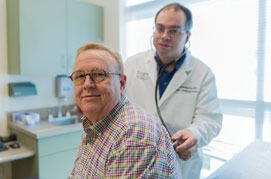 Henry Grun thought he was going to die after he learned his renal cell cancer had metastasized to his liver and lungs.“My doctor told me, ‘You ought to travel.’ I took that as code for ‘You better work on your bucket list right now,’” he said.

Fortunately, cancer center researchers had explored a new combination of a tumor-fighting drug called chloroquine with a chemotherapy drug called vorinostat. The results were promising and Grun’s physician at the center immediately enrolled him in the study. Grun received the drug in a pill form on three-week cycles. After more than 60 cycles, he was able to resume his law practice and live a normal life for more than three years after his diagnosis.

As a leader in developing new drugs to treat cancer, the IDD conducts one of the largest oncology Phase I clinical drug programs in the world. More than 4,000 patients have been treated in early phase trials. With trial locations available to patients in more than 47 counties throughout South Texas, the center is bringing new hope and health to a wider population by shrinking the distance patients need to travel to receive the latest and greatest cancer treatments available.

For more information and to support the Institute for Drug Development (IDD) at the UT Health San Antonio Cancer Center, visit our giving portal or contact Sheri Ortiz, Senior Director of Development, at ortizs8@uthscsa.edu or 210-450-5512.