Ily Guckian of San Antonio has been a fighter since her arrival on Sept. 26, 2019. Born in the 31st week of pregnancy, Ily spent her first two months in a neonatal intensive care unit.

“They wrapped her up immediately and rushed her out,” said her mother, Heather Guckian, a special education teacher. “I didn’t even get to hold her the day she was born.”

A feeding tube and medications followed. And then, “I noticed that the front of her forehead was popping out a little,” Heather said.

Ily was diagnosed with deformational plagiocephaly, a skewing of the head. Because the asymmetry was pushing one of her ears forward, Ily was at risk of ear infections and temporomandibular joint (TMJ) dysfunction if not corrected.

After asking around, Heather and her husband, Jason, found the Cranial Remolding Program at The University of Texas Health Science Center at San Antonio (UT Health San Antonio). There they met Darren Poidevin, CLPO, a licensed orthotic/prosthetic practitioner.

“What we immediately appreciated about him was that he wasn’t like, oh, absolutely, we have to put a helmet

on this kid right now,” Heather said. “He was more concerned about whether she had enough neck control to be safe in a helmet. That was a big deal to us.”

Ily was 4½ months old and developmentally delayed. Poidevin asked the Guckians to return in six weeks once she gained more neck strength. This would also show whether she could improve on her own, without cranial remolding.

When the Guckians returned six weeks later, the asymmetry was 13.5 millimeters. Everyone agreed it was time for cranial remolding.

What is this treatment?

The brain of an infant grows rapidly and reshapes the skull, which early in life is pliable to accommodate brain growth. Cranial remolding places a custom-made helmet on a baby to redirect the brain growth to achieve head symmetry. Ily, held by her mother, Heather, proudly wears her red, white and blue at the pageant.

“The helmets are made of copolymer plastic with a half-inch of soft foam on the inside,” Poidevin said. “We take a scan of the infant’s head, email it to a manufacturer and they make the helmet. Each one is made specifically for that child and that correction.

“When I receive the helmet, I don’t just put it on the child and leave it,” he said. “I see the parents and infant every two to three weeks because I’m constantly modifying the inside, making the appropriate changes for the needed directional growth. That’s how the orthotic works. We’re just redirecting the brain growth to the areas where we want it to grow.”

The Guckian family selected a leopard print helmet that Ily wore 23 hours a day for the next 3½ months, from mid-February until June 1. With the COVID-19 pandemic commencing, mom and dad were able to keep Ily home more than normal, a decided blessing because of the spring heat.

“We know people who own a pageant system, Star of America, and they are really good, genuine people, and they had already been praying over Ily and checking up on her,” Heather said. “They named her Baby Miss Texas while she was in the neonatal intensive care unit.”

The directors invited the Guckians to enroll Ily in a national pageant to be held in San Marcos, Texas. Upon hearing that Ily was competing in a pageant, someone asked if they were going to have her wear the helmet.

“We immediately said, ‘Of course we are, because this who she is right now. There’s no reason why we wouldn’t have her wear it. This is part of her, and this is her story,’” Heather said. “To me, that was a cue that we needed to educate people about children with differences.” The ruffles are bigger than the baby!

The Guckians’ 18-year-old is studying to become a special education teacher and they have two other teenage children. “We talked about people who made comments about the helmet and didn’t know any better, and we all rallied around this little baby who had just struggled,” Heather said. “We decided the Star of America Pageants National Pageant was an educational opportunity.”

The pageant included play time with the judges (peekaboo), a formal competition with a nice dress, and modeling of red, white and blue wear.

“We had a lot of fun, and she won,” Heather said. “And I was super excited that she won, but I was also excited because, it was a statement like, ‘Hey people, this is OK. Helmet or not, your baby is still a cute baby, and it’s OK.’”

The need to start early

Annually in the U.S., more than 600,000 infants will need cranial remolding treatment. Some babies are diagnosed with craniosynostosis, which is an early fusion of the sutures of the skull.

Poidevin and his colleague, Jim Brookshier, MPO, CLPO, practice in the Department of Neurosurgery of the university’s Joe R. and Teresa Lozano Long School of Medicine. They’ve evaluated more than 3,300 infants since the inception of the UT Health San Antonio Cranial Remolding Program in 2017.

A typical helmet is $3,400, which can be a significant obstacle for many families. Medicaid does not cover this therapy. The Cranial Remolding Program works with all Medicaid families to help reduce the cost.

Cranial remolding is time sensitive and delays in treatment don’t help these babies.

“It’s much better to start earlier, the younger the better, because of how fast the brain is growing,” Poidevin said. “Everything we do is based on a referral from a physician, so I encourage the pediatricians to send babies to us as young as possible when there is a concern. The initial evaluation is used as a baseline. The best time for cranial remolding treatment is between 4 and 6 months of age.” ‘A near perfect head’

Ily had a great outcome.

“Whenever we do a correction, whatever the baby’s asymmetry is, we have to get it below six millimeters,” Poidevin said. “Ily’s asymmetry was 13.5 and we got her down to two. That was a phenomenal correction. She did very well.

“Mom was very committed to the program,” he added. “Parents must be compliant with the requirements. The child has to wear the helmet 23 hours a day and must visit us every two to three weeks for reevaluation and comparison scans.”

Shortly after her pageant win, Ily was cleared to stop wearing the helmet. The 112 days she donned it is an excellent investment in her future.

“She graduated with a near perfect head,” Heather said. “But she was already perfect before.”

For more information about the Cranial Remolding Program at UT Health San Antonio, call 210-450-9064 or visit the program website.

Darren Poidevin is an orthotic/prosthetic practitioner that specializes in cranial remolding. He is currently seeing patients at the UT Health Medical Arts and Research Center. 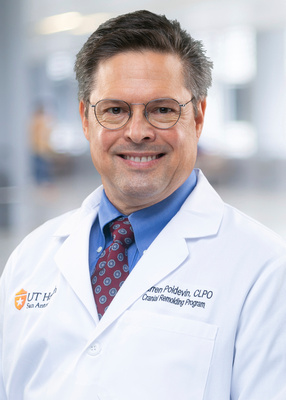 Jim Brookshier is an orthotic/prosthetic practitioner that specializes in cranial remolding. He is currently seeing patients at the UT Health Medical Arts and Research Center. 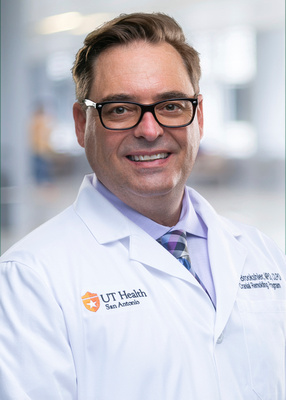