The University of Texas System was created in 1881 and consisted of two institutions. The academic campus was located in Austin and the medical campus was located in Galveston. These locations were selected by popular vote of the citizens of the state. UT-Austin first began using security guards in about 1947, when just six were hired. In contrast, the Austin campus now has 66 commissioned peace officers and 95 guards.

Our official creation as a police agency occurred in 1967 and was largely a result of a sniper incident on August 1, 1966, on the UT-Austin campus. At noon, a student named Charles Whitman took a position in the UT-Austin Main Building Tower (277 feet high) and began shooting people at random. When it was all over, he had killed 17 people and wounded 35 others.

During the 1967 session of the Texas Legislature, members of the House and Senate, in a near unanimous action, answered a growing need on Texas college campuses for adequate police protection by passing Senate Bill 162 (article 2919j, Vernon's Civil Statutes of Texas). While Article 2919j contained several provisions relating to law enforcement, the main provision which offered assistance to state college and university campuses across Texas was the authorization of the governing boards of the schools to commission certain security personnel as peace officers. In Texas, the term "peace officer" is the highest rank in the law enforcement field and is distinguished from game wardens and other titles, which come under the heading of "law enforcement officers."

However, on the other side, many faculty criticized Article 2919j from its inception. Their main objection was not to the increased standards for law enforcement on college campuses, but to the point that commissioned officers would be carrying firearms on campus. The faculty members joined by some students told the Legislature and The University of Texas administration that an academic campus was no place for a police officer with a pistol or weapon of any kind.

The responsibilities of the position of UT System Director of Police in 1967 included the establishment of (1) qualifications for all commissioned personnel, (2) organizational structure suitable for all institutions in The University of Texas System, (3) continuing training programs including basic and in-service; for the System police oriented to an educational community, (4) a uniform record system, and (5) a uniform reporting procedure. Also, the director (1) served as consultant to the Board of Regents on police and security matters, (2) coordinated police programs between institutions, and (3) conducted annual performance evaluations of the various police departments.

The image of campus security began to change. Well-trained peace officers were patrolling the campus on foot and in squad cars, offering everything from a jumper cable for dead batteries and crime prevention programs to investigations of criminal activity for the students, faculty, and staff.

When the first officers were commissioned in 1968, there were seven police departments and only 22 commissioned officers. UT Police adopted a motto of Protection, Courtesy, and Service. Professionalism in law enforcement was and is constantly emphasized. One of the first steps taken by the Director of Police was to survey each campus as to its policing needs, past practices of the traffic and security force, and the quality and ability of the security people already on the individual component's payroll.

UT Police is currently comprised of 15 police departments throughout the state totaling more than 515 commissioned peace officers and more than 571 non-commissioned security officers. 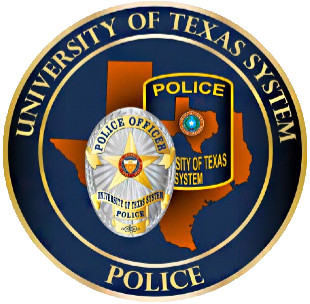