Tuesday, September 1, 2015by Will Sansom

Qitao Ran, Ph.D., is using animal models to study neurodegeneration – the underlying cause of diseases such as Alzheimer’s and ALS.

Qitao Ran, Ph.D., grew up in a remote, mountainous part of southwestern China, 200 miles from the nearest big city, Chongqing. The son of rice farmers, he developed a strong work ethic early on while helping his parents with rice field work. At school he was a good learner, and his favorite subjects were physics and chemistry. By high school, Dr. Ran established himself as one of the top students in his region.

After graduating from high school, Dr. Ran headed to the nation’s capital, Beijing, to attend college. In 1990 he finished his Bachelor of Science degree in biology at Beijing Normal University and in 1995 his Doctor of Philosophy degree in cell biology at Peking Union Medical College.

“My interest in aging research started in graduate school, and my doctoral thesis project was to investigate a possible mechanism of immune system dysfunction that makes older people susceptible to diseases,” Dr. Ran said.

The summer after earning his doctoral degree, he boarded a plane bound for Houston, Texas, to begin his postdoctoral study in the molecular biology of cellular senescence at Baylor College of Medicine in the laboratory of Olivia Pereira Smith, Ph.D.

In 2000, the Barshop Institute for Longevity and Aging Studies recruited Dr. Ran to the UT Health Science Center at San Antonio. “I came to San Antonio because I was excited about studying the role of oxidative stress in aging, and San Antonio is a great place for aging research,” he said.

Today Dr. Ran is associate professor in the Department of Cellular and Structural Biology in the School of Medicine; he is also research health scientist in the Geriatric Research, Education and Clinical Center of the South Texas Veterans Health Care System. He is funded by a U.S. Department of Veterans Affairs (VA) Merit Award. Additional support is from the Alzheimer’s Association and the William and Ella Owens Medical Research Foundation.

For several years, Dr. Ran has been interested in the molecular events, particularly the role of mitochondrial dysfunction and oxidative stress, that give rise to age-associated neurodegenerative diseases such as Alzheimer’s.

“Although a lot of data indicates that neurodegeneration is associated with oxidative stress and mitochondrial dysfunction, the role of oxidative stress and mitochondrial dysfunction in death of neurons is difficult to model,” Dr. Ran said. “Because of this, there hasn’t been a lot of success to develop drugs targeting these key events in neurodegeneration.”

Over the last decade, Dr. Ran’s lab has developed a number of new mouse models to fill the void. For this success he praises his lab team, which includes his wife, Ren Na, the lab manager.

Models should be useful for ALS, Alzheimer’s research

“We are particularly excited about a couple of new models we’ve just developed,” Dr. Ran said. “One of the models shows rapid paralysis within a few days, a very fast paralysis model caused by degeneration of spinal motor neurons.”

The mouse features deletion of a key antioxidant enzyme that inhibits a couple of cell death mechanisms, he said. “The model could be used for studies of amyotrophic lateral sclerosis (ALS),” he said.

The lab is studying another model that exhibits neurodegeneration in the brain, which could bolster Alzheimer’s disease investigations.

Basic research, such as animal studies, is very important for finding preventions and cures for diseases such as Alzheimer’s and ALS.

“Basic research can’t be neglected, because it is most likely to bring the great leaps and breakthroughs in treatments,” Dr. Ran said. “The desire to see a finding of ours translated to the clinic, to help patients – keeps me going.”

Dr. Ran returns to China about once a year to visit his relatives, particularly his father, Long Pei Ran, who is 79 years old and not in good health. Dr. Ran’s home area, still a rural region, is now served by highways and railways, so it is less remote and is increasingly becoming a tourist destination.

Although his life in science is far removed from the rice fields of his youth, Dr. Qitao Ran’s work ethic remains strong in his quest to make a difference to those with Alzheimer’s and other neurodegenerative diseases.

The desire to see a finding of ours translated to the clinic, to help patients – keeps me going.
Qitao Ran, Ph.D. 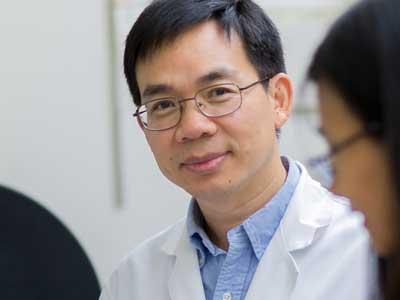