Dr. William P. Clarke says scientists, including those he mentors, bear a responsibility to explain their research accurately and understandably to members of society.

Teaching and research go hand in hand for William P. Clarke, Ph.D., as he works with rising scientists in the laboratory. “My work predominately is in the lab, it’s training, teaching, hands on, one on one,” he says. “What makes me tick is when I am able to see somebody’s mind trigger, that ‘aha’ moment, especially in younger students who may think they know what science is all about when they first come to us, and then are amazed when they really begin to understand.”

This year Dr. Clarke, a Distinguished Teaching Professor in the Department of Pharmacology, received a $25,000 Regents’ Outstanding Teaching Award from The University of Texas System Board of Regents. A longtime favorite teacher of graduate and dental students in the classroom, he recently helped to develop a course called “Fundamentals of Biomedical Science” to foster critical-thinking skills and understanding of core concepts in beginning graduate students. He says he could never devote so much time to teaching if it weren’t for Kelly Berg, Ph.D., associate professor/research of pharmacology, who co-directs the laboratory and, by the way, is his wife of more than 27 years.

Curiosity led to a career

Dr. Clarke didn’t initially set out to become a scientist, but as a boy in Boston he was constantly taking things apart. “I always liked to figure out how things worked, so I was naturally interested in science in high school,” he says. “I didn’t know if I could do it, but thought if I didn’t give it a try I would always be wondering about it.”

He earned a Bachelor of Science degree in chemistry from Boston College, a Master of Science degree in biology from Northeastern University, and a Doctor of Philosophy in physiology from the Wayne State University School of Medicine. During his master’s degree program he studied hibernation in ground squirrels, but by the time he finished a postdoctoral fellowship in 1987, pharmacology and drug-receptor interactions had become his focus.

Receptors are proteins on cell surfaces that interact with drugs. His life’s work, along with Dr. Berg’s, is to contribute new understandings of drug-receptor interactions that will lead to more effective, safer pain relief.

“Pain affects more people than cancer, diabetes and heart disease, combined,” Dr. Clarke says. “Pain is treated today the same way it has been for the past 50 years; we need to develop new, safer methods to treat pain. The problem today is that our medications, such as morphine and oxycontin, have severe side effects. Addiction is one of the big ones, along with respiratory depression, in which people stop breathing and die. These side effects occur because of drugs’ activity at receptors in the brain.”

For the elderly, who generally take a lot of medications, “having another drug for pain that messes around with the brain is not good,” Dr. Clarke says. So his goal, and that of Dr. Berg and their team, is to study the properties of peripheral receptors on the neurons that sense pain to see if they can be activated by drugs that won’t enter the central nervous system (and thus the brain), but will act only in the local area where they are applied.

A family in science

Dr. Berg, he says, was instrumental in developing a new concept called functional selectivity that is changing pharmacology and drug development today. She showed that even if two drugs acted on the same receptor, the first drug could have one effect and the second drug entirely another. Functional selectivity means that drugs can do much more than scientists previously thought and it should be possible to develop new drugs with better specificity and reduced adverse effects.

Dr. Clarke and Dr. Berg have three daughters, ages 23, 17 and 16. The couple met at Wayne State University and moved to San Antonio in 1994. “People wonder how we can spend 24 hours a day together,” he said. “It has its moments, but having someone with an equivalent level of expertise to run the lab has allowed me to devote more time to teaching.

“Also, when we go home, if an idea comes to mind, we have our colleague right there. Although we try to limit the scientific discussions at home and focus on our kids, it still has been useful.”

In a general sense, scientists need to do a better job of educating the public, Dr. Clarke says. “Most of our research funding comes from National Institutes of Health grants, which in turn is funded by taxes, so society pays for our science,” he says. “Therefore, we are responsible to society. We need to portray what we do accurately to ensure that members of society truly understand the need for continued support of biomedical research.”

Pain affects more people than cancer, diabetes and heart disease, combined. Pain is treated today the same way it has been for the past 50 years; we need to develop new, safer methods to treat pain.
William P. Clarke, Ph.D. 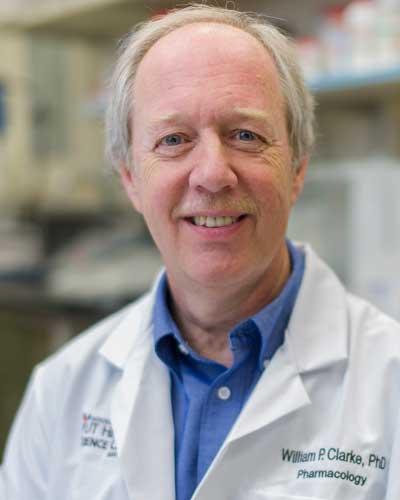