A special talent for special needs

It can be tough to find a doctor who really understands special-needs patients, but Glen Medellin, M.D., connects with them — and brings their families peace of mind.

It was bewildering to leave the hospital with a newborn who has cerebral palsy. Maribel and Victor Gardea were navigating a new world with very little guidance. And all the pediatricians they found seemed to have the same response to little Voozeki.

After a couple of years of learning the ropes of advocating for a special-needs child, the Gardeas found Glen Medellin, M.D., FAAP.

Seeing the big picture for a small population

Dr. Medellin’s work in the UT Kids clinic at University Health System’s Robert B. Green Campus is focused on patients with special needs and those needing hospice and palliative care. He had been a general pediatrician, but found he connected with special-needs children on a level that they – and their parents – responded to.

“When the families realize I’m interested in them, they are drawn toward me,” he said. “People don’t always recognize that these children really do bring a lot of joy into the world.”

The Gardeas recognize it. Voozeki’s playfulness mirrors their own spirited approach to life, whether they are planting a fruit orchard in their front yard, painting angels on their house, or building a giant concrete Tiki head for a birthday celebration for Vurukai, their other son.

“We’ve never been the type of people to hide away our son,” Maribel Gardea said. When other children see Voozeki, who has trouble sitting up and may at first not seem to be engaged with the world, she wants them to ask questions.

“I prefer that the parents don’t try to shush their children,” said Maribel Gardea.

An opportunity to learn

The Gardeas have seen how life with Voozeki has made their other son, who is one year older than Voozeki, more compassionate. And they’ve also changed.

“You learn a lot about yourself,” Victor Gardea said. “I’ve learned to ask for help at the clinic and through support groups.”

“Having Voozeki has changed the way we live,” Maribel Gardea said. “Not only have we gained more patience, we have learned how to appreciate the little things in life.”

Voozeki touches more lives in the community. He goes to school with the help of a nurse and is a favorite of several little girls there.

“They comb his hair and pretend to put makeup on him,” Maribel said.

“They want to hold his hand,” Victor said.

Voozeki loves the brightness and action of grocery store trips and can be quite clear about his likes and dislikes. His parents keep him squarely in the middle of the family whirl of activity, dressing up his wheelchair at Halloween as the Millennium Falcon. And when Voozeki must go to the hospital, as he has more than once when a common cold turned into pneumonia, his brother offers his teddy bear for Voozeki to take along.

Those trips aren’t fun for anybody, and may be part of the reason that some pediatricians see special-needs patients as sad and difficult cases.

“I think even a lot of doctors believe these kids suffer more than they do,” Dr. Medellin said. “Of course they are unhappy in the hospital, but at home they have a more normal, happier family life.”

They often also make more trips to the hospital for reasons that Dr. Medellin sees as preventable if addressed early in a clinic.

“Out in the community, many are not getting the care they need,” he said. “It’s so hard to discharge them out into the community just to see them fall apart again.”

Dr. Medellin is sympathetic, however, to the pressures on community pediatricians that make it hard to take the extra time needed for these often-complex cases.

It’s why he sees a big part of his job as advocating for more resources in the clinic. And he argues that when families have access to more information in a coordinated manner, including nurse practitioners, physical therapists, social workers and dietitians, their children have fewer hospitalizations.

“With this kind of work, we’ve started to change the culture. The complex cases come back, but with fewer complications, and we are readmitting less frequently,” he said.

Dr. Medellin also takes that message to the next generation of physicians who train with him. In recognition of that work, in 2012 he was inducted into the UT Academy of Health Science Education for teaching excellence.

For Dr. Medellin, it’s all part of his commitment to compassion and quality care.

“So often we get excited about technology and the newest innovations – rightfully so. I would be the first to embrace a cure for cerebral palsy,” he said. “But the reality is that many patients live with illnesses that are not curable. Our students need to learn how to care for them, how to advocate for their needs and how to coalesce teams of providers for the best possible outcomes.”

It’s paying off for Voozeki. The Gardeas usually see Wisdeen Wu, D.O., and get help with referral and financial questions from clinic staff members, Maribel Gardea said, but Dr. Medellin is the foundation. It gives her confidence for her son’s future.

“I feel like we finally have established a good team for Voozeki,” she said.

People don’t always recognize that these children really do bring a lot of joy into the world.
Glen Medellin, M.D., FAAP 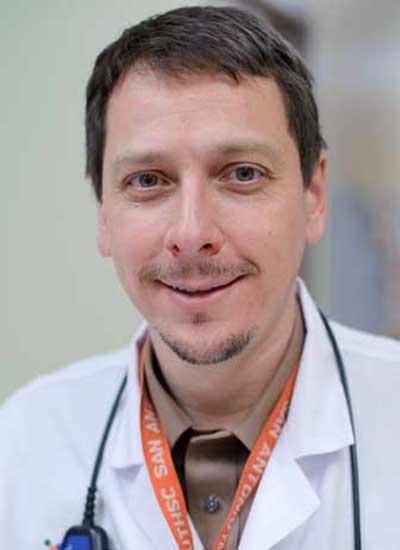