Focus on the face

As a cosmetic and reconstructive facial plastic surgeon, Dr. John Morehead has helped cancer patients, assault victims, those needing functional improvements and people who just want to feel better about how they look.

John Morehead, M.D., FACS, did not dream at first of becoming a facial plastic and reconstructive surgeon.

He spent his childhood in Lubbock, Texas, watching supersonic T-38s from Reese Air Force Base as they roared overhead. “I always wanted to be a fighter pilot, and because my dad worked as a mechanic on the planes I got to be around them a lot. I got glasses when I was 6, but I didn’t realize until I was around 16 that I probably wouldn’t qualify to be a pilot,” he said.

By his teen years, however, Dr. Morehead had developed a second love ― music. “I picked up the trumpet in the sixth grade and have been playing it ever since” ― in college at Texas Tech University and now in a community concert band, he said.

His love of the Air Force, fast planes and challenging music, plus a best friend from band, eventually bridged Dr. Morehead to his current career as a cosmetic and reconstructive facial plastic surgeon at UT Medicine San Antonio, the faculty practice of the School of Medicine at the UT Health Science Center San Antonio.

“At Tech, I was thinking about going into music education like my friend, Larry Hess, but I also had done well in science,” Dr. Morehead said.

“Larry’s father was in family practice in Lubbock. He was highly respected and a great doctor. He was very encouraging to me. I think he saw my potential to become a doctor,” he said.

Our Stories - Focus On The Face

All the pieces for a medical career came together when Dr. Morehead learned he could pay for his medical education with an Air Force scholarship. After earning his degree from UT Southwestern Medical School in Dallas, he became a flight surgeon. “Before I knew it, I was in the back seat of an F4 Phantom, flying reconnaissance missions at 500 miles an hour, 75 feet above Loch Ness in Scotland,” he chuckled.

Dr. Morehead chose to go into facial plastic surgery, a specialty that combines artistic talent, military precision and the confidence of a fighter pilot.

“I’ve always wanted to be able to fix things, rather than wait for something to heal over the long term,” he said. “And I’ve always been attracted to the face. It fascinates me how people look, and the looks they use to communicate emotions and information. The face is really the portal to the person. It helps express a person’s personality.”

Dr. Morehead completed a rotating internship followed by another in surgery, and residencies in surgery and otolaryngology (the latter at Wilford Hall Medical Center in San Antonio), as well as a post-doctoral fellowship in facial plastic surgery at the UT Health Science Center. “I had the best residency director here at the Health Science Center, Dr. Richard Holt,” Dr. Morehead said. “I was very privileged that, following nine years of private practice in Dallas, after leaving the Air Force, I was interviewed and accepted as a faculty member here when Dr. Holt retired.”

“When you think about it, this is the only type of surgery where your work is ‘on display’ at all times. Other surgical sites on the body are usually covered by clothing,” Dr. Morehead said.

Over his career, he has helped cancer patients, victims of assaults or accidents, those who need functional improvements ― and people who just want to feel better about how they look.

His favorite surgeries are for the nose and eyelids. “Rhinoplasty is the queen of form and function on the face ― and afterwards the nose has got to work. You use bone and cartilage to hold the nose in place. It takes a lot of finesse, and it’s a perfect marriage between art and science,” he said.

Dr. Morehead has repaired numerous traumas, including one recently in which the patient was shot in the jaw. The bullet went diagonally across the face and became lodged in the opposite side of the nose. “There was one small piece of bone that the bullet dislodged. When I pulled out the bullet, the bone went right back into place like a puzzle piece,” he marveled.

He also is frequently called upon to close up surgical sites in patients with head, neck and, particularly, facial skin cancers.

Dr. Morehead has seen an interesting trend in cosmetic and facial plastic surgery in which younger patients are seeking small touchups. “They have the desire for a more natural look with less down time from work,” he added.

“This is a great specialty,” Dr. Morehead said. “You might say the face is the perfect canvas for reconstructing facial injuries or defects, while offering the most opportunity for artistic beauty.”

When you think about it, this is the only type of surgery where your work is ‘on display’ at all times. Other surgical sites on the body are usually covered by clothing.
Dr. John Morehead, cosmetic and reconstructive facial plastic surgeon at UT Medicine 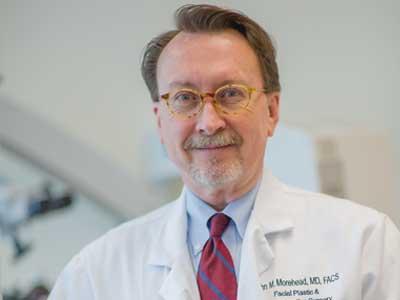