When his grandmother underwent cataract surgery, young Kundandeep Nagi became interested in medicine and especially the eye. That put him on the road to where he is today – saving the sight of glaucoma patients at UT Health San Antonio.

Kundandeep Nagi, M.D., a glaucoma specialist with UT Medicine San Antonio, was a little boy when his grandmother underwent eye surgery. That experience, along with his older brother’s interest in medicine, made a strong impression on young Kundan.

“I vividly remember when my grandmother had cataract surgery, her going into the operating room and then having to put the drops in her eyes four times a day,” Dr. Nagi says. “I chose medicine early on and became very interested in the eye.”

He grew up in upstate New York, where he attended Rensselaer Polytechnic Institute and then Albany Medical College, receiving his Doctor of Medicine degree in 2006. After completing his residency in ophthalmology in Albany in 2010, he and his wife, Harveen, moved south for his clinical fellowship in glaucoma at the UT Health Science Center at Houston.

The Empire State’s loss is certainly the Lone Star State’s gain. In 2011, Dr. Nagi joined the Department of Ophthalmology at the UT Health Science Center at San Antonio and began seeing patients of UT Medicine, the School of Medicine’s clinical practice. He and Harveen like Texas and enjoyed a warm welcome to San Antonio, he says.

“My wife was a real motivational force in my pursuit of a fellowship and our moving to San Antonio to this department,” Dr. Nagi says. The couple also celebrated the birth of a daughter, Sejan, in late February.

At the UT Medicine ophthalmology clinic, Dr. Nagi is presenting patients with new options for treating glaucoma, a disease marked by high intraocular (inside the eye) pressure. The clinic is located on the sixth floor of the Medical Arts & Research Center (MARC), 8300 Floyd Curl Drive. Surgeries are performed on the second floor of the MARC in the University Health System Surgery Center – Medical Center.

Glaucoma is sometimes called a sneak thief of sight because it causes few symptoms before the onset of visual field impairment. The disease affected 2.7 million in the U.S. in 2010, according to the National Eye Institute. Glaucoma risk strongly increases with age, particularly after age 80, and is higher among women.

“I chose glaucoma as a subspecialty because it is an area of research in ophthalmology,” Dr. Nagi says. “This is a time of finding new and novel ways to treat this disease medically and surgically.”

Dr. Nagi recently introduced a technique called endocyclophotocoagulation (ECP) to patients of UT Medicine and University Health System. ECP is performed with a newly acquired laser that can lower pressure in the eye after cataract surgery without extra incisions and with less inflammation than patients experience with other laser techniques.

The ECP procedure can stand alone or follow cataract surgery. The technique is also useful for repairing traumatic ocular injuries. ECP uses an endoscopic probe – a camera the size of a pencil lead – to directly visualize what is being treated.

In glaucoma, the optic nerve deteriorates, usually because of the high intraocular pressure. Patients with cataracts also frequently exhibit such pressure. ECP gently burns the ciliary body, the muscle that secretes aqueous humor (a liquid) in the eye. This reduces the pressure.

“Older techniques laser the muscle from outside the eye, which uses substantially more energy and results in greater inflammation,” Dr. Nagi said. “The new technique can lower intraocular pressure when used in conjunction with cataract surgery, and may decrease the need to use drops to lower eye pressure.”

Patients are appreciating this young physician’s surgical precision and warm people skills. One can’t help but wonder, when he speaks of eye drops, if his grandmother doesn’t come to his mind. After all, Dr. Nagi’s path to preserving the sight of thousands began with her.

I chose glaucoma as a subspecialty because it is an area of research in ophthalmology. This is a time of finding new and novel ways to treat this disease medically and surgically.
Dr. Kundandeep Nagi, glaucoma specialist at UT Medicine 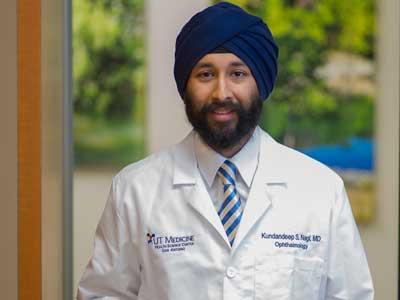