Next generation of physician-scientists

The M.D./Ph.D. program allows this young researcher to pursue dual careers as a physician and as a scientist. Vinh Dao wants to dedicate his life to caring for patients while also searching for ways to improve patient care.

Not many graduate students can say they have worked on a drug that was approved by the U.S. Food and Drug Administration.

Vinh Dao, a student in the M.D./Ph.D. Dual Degree Program at The University of Texas Health Science Center San Antonio, has already had this rare experience.

After graduating from the University of California, Berkeley, in 2006, he worked in the lab of Lawrence Fong, M.D., at the University of California, San Francisco, on a novel drug called ipilimumab or anti-CTLA-4, which was approved in 2011 for treatment of metastatic melanoma. “It was the first new drug to come along in 15 years that improved the survival of melanoma patients,” Dao said. “It also was a first-in-class drug called immune checkpoint blockade that worked by taking the brakes off of the immune system so that it could detect and kill cancer cells.

“Back then, the field of cancer immunotherapy was still considered fringe science because nothing had worked well in humans,” Dao said. “It’s really exciting to see that something I had an opportunity to work on actually became standard-of-care in cancer patients. This experience really drove me to pursue a future career in this field. Now, due to recent successes like anti-CTLA-4, cancer immunotherapy is considered a sexy field to be in.”

Indeed, Science magazine named cancer immunotherapy as the breakthrough of the year in 2013.

Dao was attracted to the M.D./Ph.D. program in the Graduate School of Biomedical Sciences at the UT Health Science Center San Antonio because the program allows him the opportunity to pursue two of his passions.

“If I love doing medicine and I love science and discovery, then it hit me, why don’t I just do both,” Dao said. “As a clinician-scientist, I would have the ability to move in between both worlds. I could take care of patients, but also use science to improve care for my patients.”

During his time at the Health Science Center, Dao has gone on two trips to Haiti and the Dominican Republic with Ruth E. Berggren, M.D., director of the Center for Medical Humanities & Ethics, to help set up mobile health clinics to diagnose and treat underserved populations.

“I knew that I had the rest of my life to devote to academia, so, during medical school, I wanted to experience something different than being in the lab,” Dao said. “When I went on these trips, I was surrounded by global health students and that was other area of medicine that I had never been exposed to before. It was scary and exhilarating at the same time. I definitely learned a lot.”

Tyler Curiel, M.D., M.P.H., Dao’s current mentor who also participated in the trips, said he was impressed Dao signed up to be a group leader for his second trip.

“I got to see Vinh not only as a clinician but also as a leader and as an organizer. There’s a lot of details, like packing medicines to take to different clinics, getting people to buses at certain times and deciding which students are going to be with which medical team,” Dr. Curiel said. "Anybody can do an elective and go to the Caribbean, but not everyone can be a team leader and have done so well.”

Currently, Dao is working in Dr. Curiel’s lab on a drug called rapamycin, which is a naturally occurring compound from Easter Island that was first discovered to have antifungal and immunosuppressive properties.

“So far, the drug is FDA-approved to prevent organ rejection in transplant patients and as a cancer treatment agent, but we are interested in rapamycin as a drug that can prevent cancer,” Dao said. “Although approved as an immunosuppressive agent, we are finding that rapamycin could boost the immune system to help fight cancer, which is a huge shift in the way that we think about this drug.”

Pushing the boundaries of science

Dao explained that he is fascinated by the future of medicine because of the rapid transformation in technology and science.

“We are at a point now where you can sequence a human genome for $1,000, whereas a decade ago it used to be billions of dollars. One of the things that scientists can do now is to take a piece of cancer tissue, figure out what specific mutations are in the DNA and devise new types of treatments to target that specific mutation in a particular patient,” Dao said. “I think that working in this new era of personalized medicine is very exciting.”

Dao is passionate about his work at the lab because he knows it makes a difference. “Being a researcher isn’t the most glamorous job, and it’s certainly not the most highly paid job,” Dao said. “But if you ask any scientist what drives them, it’s really about the advancement of knowledge and pushing the boundaries of science. Discovering something that no one else has ever discovered before, even if it’s the tiniest of things is tremendous.”

Dr. Curiel, an oncologist and immunologist at the Cancer Therapy & Research Center at the Health Science Center, explained the level of Dao’s dedication to his work: “He is really an exceptional person. He works really hard. He’s about the only person who I have to say, ‘Go home. You are working too hard.’"

Dao is a recipient of the prestigious Ruth L. Kirschstein National Research Service Award (F30) from the National Cancer Institute, which covers a substantial portion of his graduate and medical school tuition and fees. He also is the recipient of the 2014 Jess Hay Chancellor’s Graduate Student Research Fellowship, which was awarded to only one student at the Health Science Center and two students in the entire UT system.

As a clinician-scientist, I would have the ability to move in between both worlds. I could take care of patients but also use science to improve care for my patients.
Vinh Dao, M.D./Ph.D. student 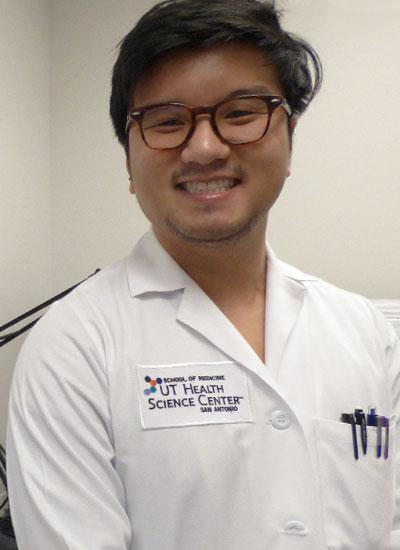