Cardiothoracic surgeon Ian Makey, M.D., of UT Medicine San Antonio, performs surgical procedures on patients with emphysema and other lung diseases to improve their ability to breathe and enjoy life.

Growing up in the shadow of two surgeons, his father and grandfather, the seed of fascination with surgery was planted early in Ian Makey, M.D.

“During Dad’s residency in London, he did an exchange program at the Ochsner Clinic in New Orleans,” Dr. Ian Makey said. “He came over as a third-year resident, liked it and decided to stay.”

A colleague convinced him to take a look at Meridian, a town on the Mississippi-Alabama border. “They’ve been there ever since, 35 years, and I grew up there,” Dr. Makey said.

Growing up with a surgeon was unique. “My sister and I remember our dad would take off warts from our knees, and our being amazed that he could numb it up and cut and we didn’t feel it,” Dr. Makey said. “We thought that was really neat.

“I split open my forehead falling off my bunk bed, and he brought us into the hospital and sewed it up. It was just one of those things.”

Dr. Makey, 37, attended Millsaps College in Jackson, Mississippi, receiving a Bachelor of Science degree in physics. He entered the Tulane University School of Medicine at New Orleans in 2002, and overcame the aftermath of Hurricane Katrina to earn his M.D. degree in 2006.

“I had left New Orleans to do externships in other states when the storm hit,” he said. “My house was flooded, so I didn’t have to pay rent for a time. My car was also flooded and then towed; we never found it. We loaded our clothes in a truck and drove back to Meridian.”

He met his wife, Colleen, while at Tulane. She finished a Master of Public Health degree there and went on to obtain a Ph.D. in environmental health from Boston University. The Makeys have three children, a boy and a girl who are twins and about to be 3, and a boy who is 1½.

Dr. Makey, a major in the U.S. Air Force at San Antonio Military Medical Center, joined the School of Medicine at the Health Science Center in 2014 as an assistant professor of thoracic surgery. He is on the lung transplant team at University Hospital and focuses on lung and esophageal cancers.

He performs a surgery called lung volume reduction surgery (LVRS). This is for people with emphysema, a disease in which the lungs become overinflated. “The way to think of it is, you are already at full breath, and that’s as much as you can let out,” he said. “There are a bunch of little sacs of trapped air. To help the person’s breathing, we resect the most diseased portions of their lungs, which allows the person to exhale. This surgery is generally only offered in places that do lung transplants.”

LVRS can postpone a lung transplant by four to five years and, for carefully selected patients, it can be an alternative to a transplant, Dr. Makey said.

Dr. Makey likes San Antonio and being a part of UT Medicine San Antonio, the clinical practice of the School of Medicine. “By specializing in lung and esophageal cancer, I need to be in a big city,” he said. “We are a referral center for complicated cases. But San Antonio still feels like a small town. I always considered a small town like Meridian to be very friendly, and people in San Antonio are that way.

“In addition, working with surgeons such as Dr. Scott Johnson, chief of the thoracic surgery division in the Department of Cardiothoracic Surgery, and Dr. Daniel DeArmond is a great situation for a young surgeon. It’s terrific learning from them and gaining from their experience.”

Dr. Makey loves the operating room, and his fascination with surgery grows every day. “To be a good surgeon, you have to be curious and committed,” he said.

To be a good surgeon, you have to be curious and committed.
Ian Makey, M.D. 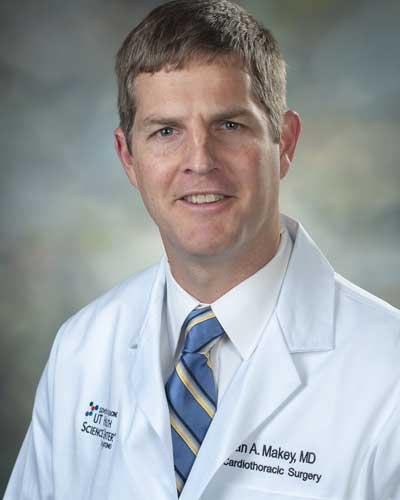