From a second-grade classroom to M.D./PhD

M.D./Ph.D. student Eithan Kotkowski had an epiphany as he promoted science to his elementary school pupils. In that moment, he realized he needed to pursue his own passion for science.

The first sign that El Paso native Eithan (pronounced Ey-Tahn) Kotkowski was a blue-chipper came in 2006, when he applied to the United World College program and spent his senior year of high school in Swaziland, southern Africa. There he volunteered at a pediatric AIDS clinic and an orphanage, planting the seeds of a medical future.

Eithan, 25, started his collegiate studies at UT El Paso, where another blue-chip indicator occurred — he volunteered in a research laboratory studying breast cancer at the Texas Tech University Health Sciences Center. At the age of 19, he co-authored a publication and presented data at meetings, which planted the seeds of a research future.

Eithan transferred to UT Austin to major in psychology, and as part of an upper-level course he worked in the school’s Child Development in Context Research Lab, investigating a gene that controls mood and emotion in children.

Epiphany at a science fair

During his senior year at UT, Eithan chose to become a teacher, to work and be independent while planning for the future. After graduation, he entered the Texas Teaching Fellows Program, which put him to work teaching a bilingual second-grade class for a year at a low-income elementary school in South Austin.

While helping out with a science fair, he showed a video of the Google Science Fair winners to students and said: “Everyone here is a scientist. Every time you ask the questions ‘why?’ and ‘how?’ you are gaining knowledge about the world. Scientists do the same thing, even for questions nobody has the answers to yet. But when they find these answers, the world learns too and it becomes a better place.” At this moment, he had an epiphany.

“I thought, I’m a teacher trying to motivate students to go into science because it’s my passion, and in my mind I’m thinking, what am I doing? Why am I not pursuing my passion?”

He went to the Internet and took some advice from his mom, who, watering the seeds planted years before, suggested he look into M.D./Ph.D. programs. In the summer of 2012, he took the Medical College Admission Test (MCAT) and that September submitted his application to the School of Medicine at the UT Health Science Center San Antonio. The school granted its acceptance in May 2013, and that summer he began lab rotations as a brand-new student in the M.D./Ph.D. Program.

Eithan’s program is 2-3-2 — two years of M.D. studies, three to four years of Ph.D. studies and two final, clinical years of M.D. training. If all goes according to plan, Eithan will have both degrees by 2020.

Somehow, Eithan finds time to teach intermediate medical Spanish to other students and is an interdisciplinary coordinator for Frontera de Salud, a program of the Center for Medical Humanities & Ethics. As part of Frontera de Salud, he is helping to lead weekend trips to multiple South Texas cities, including several along the border with Mexico.

An M.D./Ph.D. program stipend and academic scholarship are helping to defray the costs of his education.

How do emotions affect the brain?

During his first summer rotation, Eithan began conducting research on the neuroimaging of emotional memory under the supervision of Peter Fox, M.D., director of the Research Imaging Institute. “Our question is, how do different brain regions respond to different kinds of emotional stimuli?" Eithan says.

He submitted an abstract to the American Academy of Neurology and presented a poster at the organization’s meeting in Philadelphia.

“Neuroimaging is fascinating,” he says. “Psychiatry and neurology seem to be merging. I am interested in how neuroimaging can become a tool to further understand psychiatric illnesses and how that would translate to patient care.”

The seeds of medicine and science planted so long ago, and watered at strategic intervals, are producing fruit that will touch lives. Eithan is pursuing his passion and says the Health Science Center is an exciting place to study.

“The M.D./Ph.D. Program is the single program that touches everything I am passionate about,” he says.

The M.D./Ph.D. Program is the single program that touches everything I am passionate about.
Eithan Kotkowski 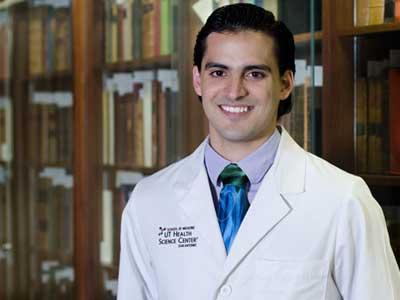