The impact you leave

Joe and Teresa Long gave generously to assist young medical students at the UT Health Science Center San Antonio. Now those students give back in many ways: time, talent and treasure.

Dina Tom, M.D., wasn’t sure she was going to make medical school a reality without a large debt load.

Tom, a first-generation college graduate, had been accepted to UT Health Science Center’s medical school. She was called into the dean’s office during her first weeks. Panicked, she couldn’t imagine what she could possibly have done wrong.

Instead of a reprimand, Tom learned she was selected as a  Joe R. and Teresa Lozano Long Presidential Scholar, which fully funded her medical education.

“I couldn’t believe it,” Tom, who is now a clinical instructor within the UT Health Science Center San Antonio’s Department of Pediatrics, recalled. “I was on cloud nine. When I found out, my husband and I were engaged. It was like a wedding present. The ability to start out as a physician with more freedom, to not be held back by your finances, to have the freedom to choose what to do, was amazing.”

Joe and Teresa Lozano Long believe in helping others fulfill their lives’.

“We had more money than we needed to live on and we decided we wanted to do something where we’d see the effect of it rather than just doing something with it when we died,” explained Joe Long in a 2013 interview with the Austin Business Journal. “We both are interested in education since that’s how we made our way. We thought we’d like to provide an opportunity to others.”

The Longs’ initial annual gifts began in 1999: The first Joe R. and Teresa Lozano Long Presidential Scholars for deserving medical students from 38 counties in South Texas who were the first in their family to attend college. The awards fund full scholarships for tuition, fees, instruments, textbooks and additional expenses.

In 2008, the Longs made a transformative gift of $25 million to establish The Joe R. and Teresa Long Scholarship Research and Teaching Fund endowment, which resides in the Office of the President.

"The reason we’re doing this is because we truly believe this institution can continue to be an outstanding place that helps many, many people in Texas," explained Teresa Lozano Long in a past interview.

Leo Lopez III, a current Long Presidential Scholar, said that the scholarship allows him to plan a future without the looming legacy of loans. He hopes to return to his hometown in the Valley as a physician.

“To be able to decouple the financial burden was a huge thing,” Lopez said. “It was life-changing. It enables me to continue a lot of my work in global health.”

Lopez has the financial freedom to pursue public health initiatives in Guatemala and mentor students in health and leadership when he in his hometown in the Valley.

“Service is at the core of who and what I am, and what I want to do in the future,” Lopez explained. “When you lift the financial burden, the opportunities are more obtainable. Mr. and Mrs. Long made that possible for me.”

The Longs’ example has fostered a cycle of giving.

Dr. Tom recalled Joe Long saying that giving even a small gift, is important. It is about the idea that someone out there believes in you and supports you.

His words inspired Tom and Jeff, her husband, to start saving to establish a scholarship.

“I don’t think I would feel as compelled to establish a scholarship earlier (in our lives), but I see and feel the impact,” Tom said. “Even if it is just $1,000 that could mean a lot to someone — we have the ability to do that now.”

The fact that the Longs believed in her was the push that got her through the long nights of studying, Tom said. The sense of responsibility she felt to do well, to make the Longs proud of her, was a great inspiration.

The Long scholars fulfill what Joe Long hoped: "What we consider the real legacy are the students who will be educated as a result of these endowments. They will make a difference in the future of health care for generations to come."

What we consider the real legacy are the students who will be educated as a result of these endowments. They will make a difference in the future of health care for generations to come.
Joe Long 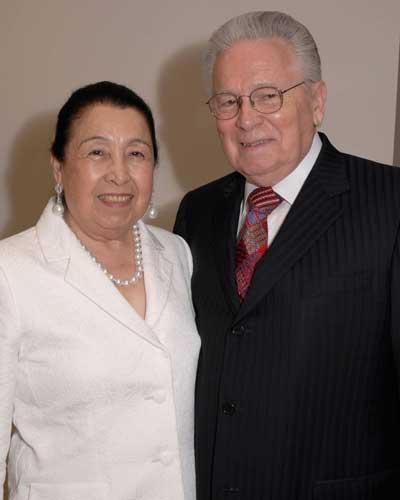