As a child, Matt Lunati saw the challenges his mother dealt with on a daily basis. Meredith Lunati, born three months premature, is deaf.

“Back then, it was a miracle she lived. A big part of growing up was empathizing with my mom’s situation and trying to draw her in to everything going on,” said Lunati, a third-year medical student at The University of Texas Health Science Center at San Antonio.

Matt’s mother would praise her youngest child on how perceptive he was about people with disabilities. Today, Matt believes this observation was what first led him to consider a career in medicine.

“My mom always said I could read people well. I think that gave me the confidence one needs to be able to help patients,” he said.

Born and raised in Atlanta, Lunati attended The Westminster School where he was an award-winning multi-sport athlete. He went on to play football at Harvard University where he earned his bachelor’s degree in neurobiology.

“Playing football at Harvard was an incredible experience. I was surrounded by wonderful people,” he said. “That experience taught me a real work ethic. You had a massive commitment to football but also to your academic work. I think that helps me now with handling the stress of tests and pressure in different medical settings.”

Lunati said when he was applying to medical school, he considered staying closer to his family in Atlanta, but one visit to the UT Health Science Center changed his mind.

“Everyone here seemed very invested and passionate about teaching, patient care and research,” he said. “I truly feel blessed to be here. This environment is all about the students and helping us to succeed. When I saw the university tagline, ‘We make lives better,’ I knew I was at the right place. I believe that is what this school does.”

In addition to wanting to treat patients, Lunati said he is interested in performing research to improve patient care. He said he was thrilled to learn the amount of research being conducted here because of the huge military presence in the city.

As a student on a military scholarship, Lunati is an ensign in the U.S. Navy. His military assignment at this time is to attend medical school. When he completes medical school, he will become a lieutenant and then do his residency with the Navy. After his residency, he has a four- to five-year commitment to serve as a doctor in the Navy.

The proximity of the military allowed Lunati to participate in a military research project while still in medical school. After attending a research presentation by Jennifer Sharpe Potter, Ph.D., M.P.H., assistant dean for research and student programs in the School of Medicine, he told her about his research at the U.S. Army Institute of Surgical Research at the San Antonio Military Medical Center.

“Dr. Potter encouraged me to prepare the research for the school’s annual Passport 2015 poster contest,” he said. Lunati created the poster, titled “Assessment of Four Junctional Tourniquets in a Manikin Model,” and won first place in the medical student division for the high quality of his presentation. For his first place award, Lunati received a cash award from the School of Medicine Alumni Association.

Lunati said the research was performed in the lab of retired Col. John F. Kragh Jr., M.D., a physician at the Battle of Mogadishu whose second career is performing research dedicated to improving combat casualty care.

The research involved four tourniquets approved by the U.S. Food and Drug Administration. The study determined that two of the four are better for use by the military. The research also showed that one was preferred because it is $361 less expensive and weighed less, which would lighten a medic’s load.

Lunati said he feels very fortunate to have the opportunity to perform research that can help members of the Armed Forces. “I can’t express how blessed I am to be here. I have so many opportunities here to learn about patient care and about research. I know I will leave here well prepared for a career in medicine.”

I truly feel blessed to be here. This environment is all about the students and helping us to succeed.
Matt Lunati 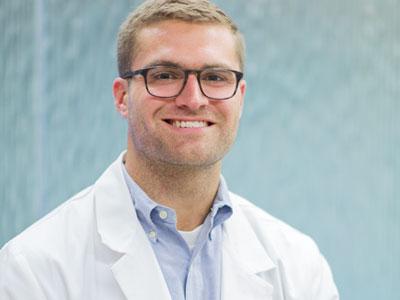