The extract of cork tree bark, marketed as Nexrutine, has long been used as an anti-inflammatory in ancient Chinese medicine, but A. Pratap Kumar, Ph.D., is busily teasing out its many cancer-fighting potentials.

Everyone knows you’re supposed to eat your vegetables. And when it comes to cancer, the link has been established between a diet high in fruits and vegetables and lower rates of cancer. But A. Pratap Kumar, Ph.D., looks past the leafy greens — he’s into tree bark.

Dr. Kumar, a professor in the departments of Urology and Molecular Medicine, is fascinated by the possibilities in natural products, and for the past several years he has focused on an extract of Amur cork tree bark (Phellodendron amurense).

“Most drugs were derived from plants originally,” said Dr. Kumar, who is also co-leader of the Cancer Prevention and Population Science program at the Cancer Therapy & Research Center  (CTRC). “And I think we make use of only about 30 percent of the plants on the planet.”

Dr. Kumar’s early research shows that the cork tree bark extract could reduce the unpleasant side effects of some treatments, boost their efficacy, and possibly prevent cancer or slow its development.

And, crucially for launching such research, a small clinical trial conducted through the CTRC  showed that the extract was nontoxic to the prostate cancer patients who participated.

If it turns out to have the benefits Dr. Kumar anticipates, people won’t have to plant Amur cork trees in their backyards and gnaw on the branches. The extract has for centuries been a part of ancient Chinese medicine, and now is commercially available as a natural supplement under the name Nexrutine.

That has eased some hurdles of research. Nexrutine’s status as an over-the-counter dietary supplement means manufacturers are held to certain federal production standards. However, it faces other challenges, namely a diminishing supply of grant funds.

The lifeblood of research is funding, and obtaining it has become more challenging for all researchers in recent years.

“He’s done a great job of characterizing the potential benefits. He just needs a longer, more definitive trial to prove things,” said Joseph Basler, M.D., Ph.D., professor of urology in the School of Medicine at the UT Health Science Center. Dr. Basler worked on the clinical study of prostate cancer patients at the CTRC. “The problem is competition for funding.”

For Dr. Kumar’s work in Nexrutine there is an additional hurdle. Because the cork tree bark extract is not a single agent, it complicates the results of any experiment. That’s a critique Dr. Kumar has received on numerous occasions, including feedback on grant applications.

But cancer is not a single disease.

And while there are many kinds of cancers, even a specific cancer can have multiple strategies for growing itself. Defeat one pathway and it often finds another. In response to this, researchers are turning to the development of combination therapies to fight the cancer on multiple fronts. Dr. Kumar’s argument is that Nexrutine is a potential combination therapy all by itself — certainly it holds promise working in conjunction with other treatments.

“Cancer is a heterogeneous disease operating in multiple pathways,” Dr. Kumar said. “The more targets we hit, the more advantage we have.”

Another thing that sets it apart from other COX-2 inhibitors like aspirin — itself a derivative of willow tree bark — is that it also works in other ways. Apart from inflammation, Dr. Kumar has evidence that Nexrutine may affect cancer through pathways like angiogenesis and oxidative stress.

Then there is the promise of Nexrutine as adjuvant therapy, which is a treatment given along with or after the main therapy to boost its effectiveness.

Dr. Kumar found in his experiments that Nexrutine inhibits a process called fibrosis. Fibrosis is scarring of tissue that happens in several cancers, including lung, kidney, pancreatic and liver cancer.

“This scarring prevents drugs from entering the tumor site,” he said. “In the laboratory model of pancreatic cancer, the Nexrutine did not cure the cancer, but it did prevent fibrosis, so it could possibly help make other drugs more effective.”

Another way Dr. Kumar hopes Nexrutine will prove useful is in increasing and restoring bone mineral density. Early results support this, he said, and it’s an important finding, because some chemotherapies cause problems with the bone. Patients on some chemotherapies experience bone pain and may be more susceptible to fractures. It is possible that Nexrutine taken in conjunction with these chemotherapies could ease these side effects.

The evidence also suggests that Nexrutine could help boost the effectiveness of radiation therapy. This “radiosensitizing” effect could mean reducing the radiation dose. Suleman Hussain, a graduate student in the Department of Pharmacology who is working in Dr. Kumar’s lab, is excited about the prospects.

“If we are able to reduce the dose of the radiation therapy by using a radiosensitizer, that will lead to lesser side effects and give patients a better life,” Hussain said.

The possibilities are numerous.

“Each day I’m learning new things from this,” Dr. Kumar said, “but I only have two hands to work with.”

To make more hands, Dr. Kumar is collaborating with other investigators, while still others have initiated projects based on Dr. Kumar’s initial work. Related experiments are going on from Thomas Jefferson University in Philadelphia to Central South University in Hunan, China.

Cancer is a heterogeneous disease operating in multiple pathways. The more targets we hit, the more advantage we have.
A. Pratap Kumar, Ph.D. 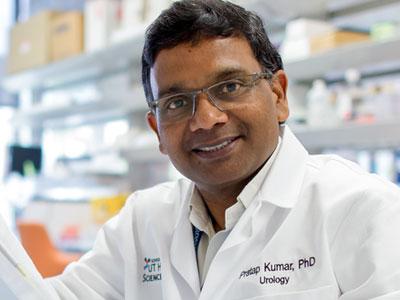