Walter Mejia’s role as operations manager at the South Texas Research Facility is to facilitate the work of scientists, and he plays a crucial role in often groundbreaking research.

Walter R. Mejia isn’t a researcher, but he’s participated in hundreds of research projects. He isn’t a scientist, but he’s been a part of breathtaking advances in science. No, he says, he’s simply the go-to guy, the problem solver, the bridge.

Mejia is the operations manager at the South Texas Research Facility, a 190,000-square-foot facility on the Greehey Academic & Research Campus that serves as the heart of the Health Science Center’s research enterprise. He’s been in the job since the building opened in 2011.

“My role is to assist researchers to do what they do,” Mejia said. “My goal is to be the middle man between other support departments. I’m involved with space assignments — how do we accommodate them — and how to best plan for their needs. Sometimes we have to remodel, and I’m involved with that too, and so on. I make sure the researchers have the infrastructure they need to be successful.”

Other than walking 12,000 to 14,000 steps a day through the massive research facility, there is no typical day, Mejia said. “Whether it’s a leak, an issue with the freezers or other equipment in the labs, or a member of the faculty or staff or a student needing assistance, it really varies. My job is to make it all run smoothly.”

And at the end of the day, he added, “I truly do feel like I share in the research.”

After growing up in California, Mejia moved to San Antonio and started working at the Health Science Center in 1984, even before graduating from UTSA.

He recalled going to hear a presentation by Edward Masoro, Ph.D., the chairman of the Department of Physiology at the time who was conducting research on the aging process. Mejia was fascinated by the subject, struck up a conversation with the professor and the two hit it off. He soon found himself working in the chairman’s physiology labs with the aging group. In 1991, Dr. Masoro founded the UT Health Science Center's Aging Research and Education Center, the precursor to today’s Barshop Institute.

Dr. Masoro, Mejia said, “gave me the opportunity and the friendship. He continues to be a fantastic mentor, a great person. I cherish our friendship.”

When David S. Weiss, Ph.D., now dean of the Graduate School of Biomedical Sciences, arrived in 2005 as chairman of the physiology department, Mejia took on more of an administrative role. And when Dr. Weiss got involved in the planning for the new STRF, Mejia joined in that effort. It was a natural, then, that he move to the research facility as operations manager.

Walking through the numerous labs in the STRF, Mejia greets everyone by name and peeks through lab windows like a proud father looking at his new baby in the hospital nursery. This researcher “is an absolutely brilliant guy,” he says; another “is just doing amazing work.”

“I feel like I work for the Health Science Center umbrella,” Mejia said, “not one individual department. That gives me the latitude to help as many researchers as possible.” That attitude was recognized in 2007 when he received the Presidential Employee Excellence in Service Award.

Precision at work and at home

Mejia is surrounded every day by exacting and precise experiments and research. That precision is carried over to his “spare time” passion — repairing and restoring vintage watches.

When his father passed away, his mom offered his dad’s old, broken watch to his brothers, who both declined. Mejia took it. “It wasn’t that I wanted to see what value it had,” he said. “I just wanted to see it work again.”

He took it to repair shops in San Antonio, Dallas, Houston, even Philadelphia. “And they all said, no, we can’t fix it. It’s too old.”

Knowing he had nothing to lose, he said, he took the watch apart, started cleaning it and learning about watch mechanisms, and persisted until he found the part that was broken. It took him four years to complete the process and find the right parts, but today it works just fine, he said.

Mejia approaches his job as STRF operations manager in the same way: Learn how it works, find out what is needed, and fix it.

And he hopes to keep doing it for many years.

I make sure the researchers have the infrastructure they need to be successful.
Walter Mejia, operations manager at the South Texas Research Facility 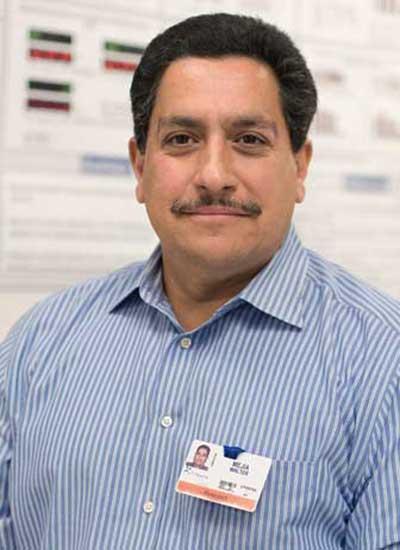