A degree in dentistry enables a San Antonio scientist to do more with cancer research than she ever imagined.

Only a third of patients with late-stage oral cancers survive five years after the diagnosis, and the pain they endure defies description. That’s why the research of Cara Gonzales, D.D.S., Ph.D., assistant professor of comprehensive dentistry at the UT Health Science Center, is so needed and so exciting.

Dr. Gonzales’ fascination with research began when she was a student at Incarnate Word High School in San Antonio. “I just loved biology from the get-go,” she says. Her father, a mason, and her mother, an insurance claims specialist, always encouraged but never pushed her. “They were my biggest cheerleaders and my greatest role models. My father taught me perseverance, as he took courses at night for many years and ultimately earned a master’s degree in historical preservation. And my mother didn’t just tell me I could do anything I put my mind to, she made me actually believe that I could.”

Dr. Gonzales attended St. Mary’s University and majored in biology. During this time she developed a keen interest in genetics and cancer. As she neared graduation, an uncle, who is a biomedical researcher, realized her potential and encouraged her to apply for a Ph.D. program.

A product of the Health Science Center

Born and raised in San Antonio, Dr. Gonzales reached out to her hometown UT Health Science Center and found Ellen Kraig, Ph.D., professor of cellular and structural biology in the School of Medicine, who gave her a job and the research experience she needed to be admitted as a doctoral student in 1995.

By 1998, she was working with Mary MacDougall, Ph.D., in the School of Dentistry. Dr. Gonzales was studying the genetics of inherited tooth disorders when the National Institutes of Health launched a Doctor of Dental Surgery (D.D.S.) and Doctor of Philosophy (Ph.D.) dual-degree program. Dr. MacDougall encouraged her to apply for the F30 award, which paid half of her School of Dentistry tuition. Dr. Gonzales received her D.D.S. and Ph.D. degrees in 2003.

Over the years, numerous investigators aided different phases of her development. Ken Hargreaves, D.D.S., Ph.D., professor and chairman of endodontics and professor of pharmacology, physiology and surgery, has been her mentor since 2006 when she first shifted her research focus toward oral cancer and cancer pain. His experience and advice were critical to Dr. Gonzales becoming an independent investigator.

A dentist and scientist

In this way, Dr. Gonzales became a clinician-scientist. “It wasn’t planned, and yet it worked out exactly the way it should have,” she says. “Getting the dental degree enabled me to do so much more with my cancer research than I could ever have done otherwise.”

Dr. Gonzales is also an affiliated investigator with the Cancer Therapy & Research Center (CTRC) at the UT Health Science Center. Another mentor, Susan Mooberry, Ph.D., professor of pharmacology, is co-leader of the Experimental and Developmental Therapeutics Program at the CTRC. She has guided Dr. Gonzales as her research expanded into drug discovery and development.

Dr. Gonzales and her team recently reported that mouse models of human oral cancer, when treated with an agent called capsazepine, show dramatic tumor shrinkage. Capsazepine kills the cancers selectively; it leaves normal tissues unharmed and also acts on neurons to block pain. “This is a very desirable combination in a potential medication,” she says.

So far, only local administration of capsazepine, directly into the primary tumors, has been tested in mice. Because many patients with oral cancer have disease that has spread, Dr. Gonzales and her team are developing novel drugs similar to capsazepine that can be delivered systemically, to reach metastatic disease that is not easily accessible. In collaboration with Stanton McHardy, Ph.D., of the Center for Innovation in Drug Discovery, a collaboration of the Health Science Center and UT San Antonio, several novel compounds that are similar to capsazepine have been developed. These promising drugs have proven to be more potent in the mouse model for oral cancer and are being developed for systemic administration to target metastatic disease.

“The overall survival rates for oral cancer patients with advanced disease have not changed in nearly 40 years,” Dr. Gonzales says. ”Ultimately, our goal is to develop new therapies to improve survivorship of this insidious disease.”

On a personal level, Dr. Gonzales has witnessed the suffering of patients and family members with cancer. “While I was in graduate school, my grandmother died of lung cancer and my aunt died of pancreatic cancer,” she says. “That saying, ‘everyone is touched by cancer,’ is true. Once you witness it, you feel compelled to do something about it.”

That saying, ‘Everyone is touched by cancer,’ is true. Once you witness it, you feel compelled to do something about it.
Dr. Cara Gonzales, D.D.S., Ph.D. 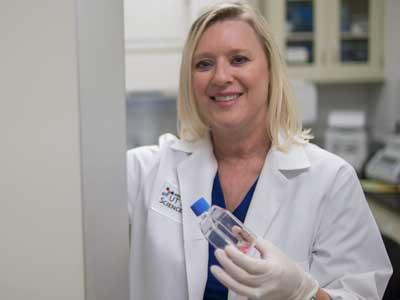