Beyond medical care for pediatric patients

Shafqat Shah, M.D., is more than a pediatric hematologist-oncologist for Samantha Alvarez and her family. She's been an advocate and source of strength.

Throwing up at 11:30 a.m. every day was definitely out of the ordinary for 5-year-old Samantha Alvarez. Her family had just moved to San Antonio from Santa Barbara, California, and her mother, Dulce Alvarez, first suspected the unaccustomed heat or maybe something the little girl had eaten. Then the fever started.

A trip to the ER at University Hospital revealed an aggressive malignant brain tumor that required swift and very risky surgery. She survived the surgery but remained unconscious, and the experts predicted she wouldn’t live to see her sixth birthday, a mere two months away.

Alvarez would not give in. “I felt it wasn’t her time,” she said. For a month she remained in the hospital by her unconscious daughter’s side.

And then Samantha moved her finger. And Alvarez knew she was coming back.

But getting that far meant that the tiny girl would have to face chemotherapy, radiation and bone marrow transplants. That’s when pediatric hematologist-oncologist Shafqat Shah, M.D., took over her care.

Now Samantha is 13. She wears lip gloss and carefully mismatched earrings, and keeps a sharp eye on her smaller sister and brother.

The journey has been a long one for the family, and Dr. Shah has taken that journey with them.

“I am here in Texas with my three kids, no family here,” Alvarez said. “My son was born at that time. It was very stressful. The dog that we had at the time even died.”

And Samantha’s condition required more than treatment — it required advocacy.

“Insurance didn’t want to pay because it was experimental,” Alvarez said. Dr. Shah pulled in a social worker along with a team of health care experts to look after Samantha and “we did it. She got three bone marrow transplants in the middle of a lot of chemo.

“Dr. Shah knows my daughter inside out, and she knows what she needs. We have never been to the ER since, and it’s because Dr. Shah takes such good care of her patient. My daughter’s in remission now but we don’t want to move. We don’t want to go to another doctor.”

For all the praise heaped upon her by the Alvarez family, Dr. Shah places much of the success at their feet.

“Being a young child, going through round after round of chemotherapy and radiation for six months, that takes a lot of strength, and a lot of cooperation from the family,” she said. “It’s a lot of resilience for a single mother with three children under the age of five.”

Samantha, at 13, can roll her eyes and complain about homework like a teenager. But she’s as tender as a small child with Dr. Shah — “she’s my special doctor,” Samantha said, embracing her. And she’s as mature as an adult when she talks about her illness.

“We still have the masks” used in the radiation therapy she received at the Cancer Therapy & Research Center. “Once in a while I try them on to see if they still fit.”

“Here” is a busy place, as Samantha participates fully in school, takes martial arts and gym, and helps at church. At her checkup in the pediatric hematology unit at University Hospital, she brings her own medical questions, including what type of nail polish would be safest.

“We write letters to the school and let them know if there are any precautions they need to take, but also make sure she’s not held back from activities that she’s really able to do,” Dr. Shah said.

“We did all this to her to give her a chance at surviving -- and she’s surviving -- but she’s also developed some issues because of the aggressiveness of the treatment. We have an obligation to the patient to take care of her through these issues.”

Along with Dr. Shah’s advocacy and the complex medical care she oversees, Alvarez noted something else the physician did that helped the family through some of their darkest hours.

“Every time she came into the room, she smiled,” Alvarez said. “She has such a way with the children. She never says anything negative. She would make the kids smile even if they’re crying in pain.” 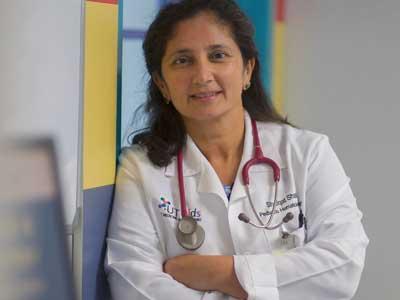