For the love of teaching

Dina Tom, M.D., shares her enthusiasm for the art of medicine with young physicians-to-be, teaching them to question and be prepared for the unexpected.

Dina Tom, M.D., assistant professor of inpatient pediatrics, began as a first-generation college student who only knew she was fascinated by medicine. Dr. Tom, who grew up in Boerne, Texas, earned her bachelor’s degree at The University of Texas at Austin. She was accepted to the UT Health Science Center at San Antonio’s School of Medicine with no idea how her medical career might evolve.

Dr. Tom, now an assistant professor in the UT Health Science Center’s Department of Pediatrics, always thought she would be a teacher. As the oldest of four children, she was always helping to teach her younger siblings something.

She, however, never dreamed that she’d become a doctor who taught medical students and residents. A little help from others and fate helped put her into a position she loves.

“I love school,” she said. “I’m always going to find a reason to be in school or teach, because I love the environment of learning.”

Dr. Tom knew she liked academia too much to leave.  As a pediatrician, she has the opportunity to educate, but the classroom component was missing.

“That’s what attracted me to pediatrics,” she explained. “You are a teacher to parents and to kids. Kids are easier: They aren’t like adults, who are often set in their ways and harder to teach.”

When she was offered a position to teach in the School of Medicine at the UT Health Science Center, she was thrilled. Her appointment allows her to practice medicine and also remain active on the academic side that she enjoys so much.

Her parents were not surprised.

Best of both worlds

Dr. Tom is a hospital-based pediatrician, which means she serves as an on-staff doctor for newborns, children and their families at University Hospital.

“I’ve always loved teaching,” she said. “I like the variety better between first and second year. The students are eager sponges.

“I can get them excited about being good physicians. It is nice to teach at different levels, because it helps me remember that medicine is really fascinating.”

Dr. Tom isn’t a lecturer but prefers to think of herself as a facilitator. She often puts her students into small groups and requires them to teach topics. She expects them to prepare the material and, thus, prepare themselves and others for real-world scenarios.

In a rare lecture about fluid use for ill children, she explains the material and then asks for audience participation to answer the questions.

She walks the students through the scenario of a child with burns, who would be losing liquids faster from heat and injuries.

What happens if the child has seizures? What changes? How does that affect their plan for fluids? What kind of fluid? How much?

She asks for brave souls to shout out the answers. One student does and has the appropriate response.

That’s the expectation she has for all of her students: Be prepared.

“As a medical practitioner, they will have to be prepared and think quickly through multiple scenarios,” she said. Being open to the unexpected and to new ideas is critical."

“Things change so quickly,” she says. “This is what we know now, but this is not etched in stone. You have to be willing to accept that things may change later.”

I can get them excited about being good physicians. It is nice to teach at different levels, because it helps me remember that medicine is really fascinating.
Dina Tom, M.D. 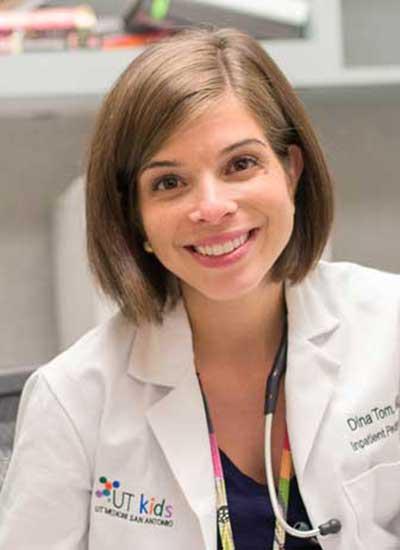