Stacey Young-McCaughan, Ph.D., RN, has found exercise to be the best prescription for boosting mood and preserving physical function. Can exercise also help alleviate PTSD and improve recovery from other health issues?

Avid runner Stacey Young-McCaughan, Ph.D., RN, truly believes exercise is the best medicine. And, she is dedicating her career to studying its effect on those battling PTSD, cancer and other health concerns.

Growing up in rural upstate New York, Dr. Young-McCaughan, professor of research in the Department of Psychiatry in the School of Medicine at The University of Texas Health Science Center San Antonio, played every sport the school offered. 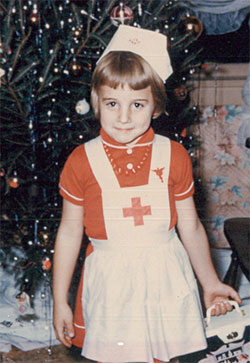 From an early age, she also was interested in becoming a nurse. One summer she was a candy striper at the local hospital, bringing cheer to patients up and down the halls.

A career in health care came into sharper focus, however, when her mother was diagnosed with advanced breast cancer when Dr. Young-McCaughan was 11.

“Mom’s cancer was very serious. She had a radical mastectomy (removal of the entire breast and chest wall muscles) and an oophorectomy, where both ovaries are removed. In those days, doctors didn’t have any hormonal treatments for breast cancer – just surgery,” she said.

“Mom was very sick, but she never seemed to let it get her down. When dad would take my brothers and me to visit her, she looked terrible, having had two big surgeries so close together, but she asked me for a backrub. I really think it was more for the physical bonding than it was for pain. Giving her backrubs was never scary for me,” Dr. Young-McCaughan said.

With her mother recovering ―and having an adventurous spirit ― Dr. Young-McCaughan earned a bachelor’s degree in nursing at the University of Wyoming, then entered the U.S. Army Nurse Corps, as more opportunities became available for women in the military.

This blossomed into a 29-year career as an oncology nurse and avid researcher investigating a variety of topics including the benefits of exercise to improve pain management, quality of sleep and recovery from breast cancer. All the while, she ran to meet the Army’s physical fitness requirements.

In 1989, Dr. Young-McCaughan earned a master’s degree in oncology nursing from Yale University. In 1997, she earned a doctorate in research nursing from the University of California, San Francisco, focusing her research on the benefits of exercise.

In part because of her cancer expertise, in 1998, Dr. Young-McCaughan was named deputy director of the Congressionally Directed Medical Research Programs of the U.S. Army Medical Research and Materiel Command, which included supervising a $25 million breast cancer research program.

Following several other high-level research posts, she retired as a full colonel in 2008, with her last assignment at Brooke Army Medical Center as chief of Clinical Investigation and chair of the Institutional Review Board there, which administered all protocols for research trials conducted in Iraq.

Dr. Young-McCaughan serves as director of research for STRONG STAR and the Consortium to Alleviate PTSD. The consortia are part of the Department of Psychiatry at the Health Science Center.

“As director of research, Dr. Young-McCaughan does a superb job guiding civilian and military researchers through the process of gaining funding for, and conducting a wide variety of, clinical trials to help find a cure for PTSD,” said Dr. Peterson, who garnered more than $100 million from the U.S. Departments of Defense and Veterans Affairs, as well as other sources, to fund clinical trials through the consortia.

Finding a cure for PTSD

A runner to this day, Dr. Young-McCaughan is leading a STRONG STAR-affiliated clinical trial examining the role of exercise in the treatment of PTSD, with the idea that the fight-or-flight instinct soldiers experience when in danger can be used to help them recover from PTSD.

“I’m a firm believer that exercise is a really powerful intervention. It’s just like taking your pills in the morning, except that it costs little and has few side effects. It can improve your mood and help you function much better,” she said.

Perhaps her new clinical trial will someday show that exercise can be one of the best medicines to help the approximately 250,000 military members suffering from PTSD return to a normal life, while staying fit physically.

I’m a firm believer that exercise is a really powerful intervention. It’s just like taking your pills in the morning, but it doesn’t cost anything or have any side effects. It can improve your mood and help you function much better.
Stacey Young-McCaughan, Ph.D., RN 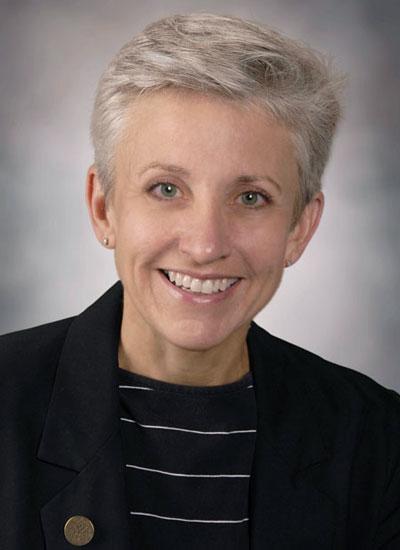