Research that makes a difference

“I was starting my hospital rotations and seeing the sick patients, from young children to older adults, and the suffering of their families. I just felt that it was so important to not only care for people but to conduct research.” — Nicolas Musi, M.D.

Scientists must have a clear idea and sense of mission about their work, says Nicolas Musi, M.D., director of the Sam and Ann Barshop Institute for Aging and Longevity Studies at the UT Health Science Center at San Antonio. The best research takes place not only when people are well qualified, but when they are committed and have clear objectives, he says. This philosophy guides his studies of aging and diabetes — and his leadership since 2013 of the Barshop Institute, one of the world’s premier aging research centers.

Dr. Musi, who also directs the Geriatric Research, Education and Clinical Center (GRECC) in the South Texas Veterans Health Care System, grew up in Mexico City. His father was a business administrator in both the private and public sectors, while his mother taught communications in the National Autonomous University of Mexico (UNAM).

In 1995 Dr. Musi earned his medical degree with honors from the Anahuac University School of Medicine in Mexico City. He then experienced a year of basic laboratory research with noted endocrinologist Alfredo Ulloa-Aguirre, M.D., D.Sc., of UNAM.

Children and families kindled the flame

The love of research and the conviction of its importance began to grow in Dr. Musi. “I was starting my hospital rotations and seeing the sick patients, from young children to older adults, and the suffering of their families,” he says. “I just felt that it was so important to not only care for people, but to conduct research. The logical decision was to become a physician-scientist.”

The young M.D. accepted a residency at the University of Miami’s Miller School of Medicine to train in internal medicine. Three years later, he was invited to a prestigious endocrinology and diabetes fellowship at the Harvard program of the Joslin Diabetes Center and Beth Israel Deaconess Medical Center in Boston. The research theme continued.

“The people there had a very clear mission, which was to advance research in diabetes and tackle the disease through education and research,” Dr. Musi says. “That is the same type of mentality we have at the Barshop Institute, a commitment to improve the health of people, in this case through understanding the aging process and the diseases of aging.”

In 2003 he accepted an offer to join the School of Medicine at the Health Science Center. “It was crucial to come to San Antonio to advance my research and career in diabetes because San Antonio has one of the best translational programs in diabetes,” he says. “I immediately became aware of the aging program and got immersed in it through the people at the Barshop Institute and the VA, and this has been critical to developing my research of aging as well as diabetes.”

The philanthropic support of the Barshop Family, the demographics of San Antonio, the GRECC and the Center for Healthy Aging in the School of Medicine all represent a confluence of resources for studying both aging and diabetes, Dr. Musi says.

“The most exciting area of aging research is the new translational approach to take discoveries from the research bench to the patient bedside,” he says. “We are at the point of finding mechanisms that control aging and trying to intervene to promote health as age advances.”

Dr. Musi enjoys playing soccer and being with his family, including watching movies with his wife and two daughters. His wife, Alexandra, is a physician. “She is from Mexico City and I met her at medical school,” he says. “She was one class behind me. She trained at Brigham & Women’s Hospital in Boston as a diabetes educator while I was training at Joslin.”

Dr. Musi’s research is varied, with multiple programs going on at any given time. One of his programs is investigating the effects of exercise on tiny cellular power plants called mitrochondria. His data suggest that exercise beefs up these power plants, increasing both their size and number.

Amid his research and seeing VA patients, Dr. Musi’s role as a leader has been growing, especially since his appointment as Barshop Institute director. “My role as director is to stimulate and support our investigators,” he says. “This is best done in an environment that is conducive to allowing them to develop their ideas and carry out their research.”

We are at the point of finding mechanisms that control aging and trying to intervene to promote health as age advances.
Dr. Nicolas Musi 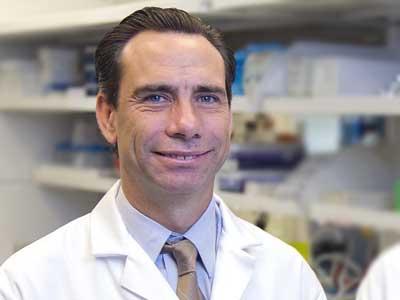