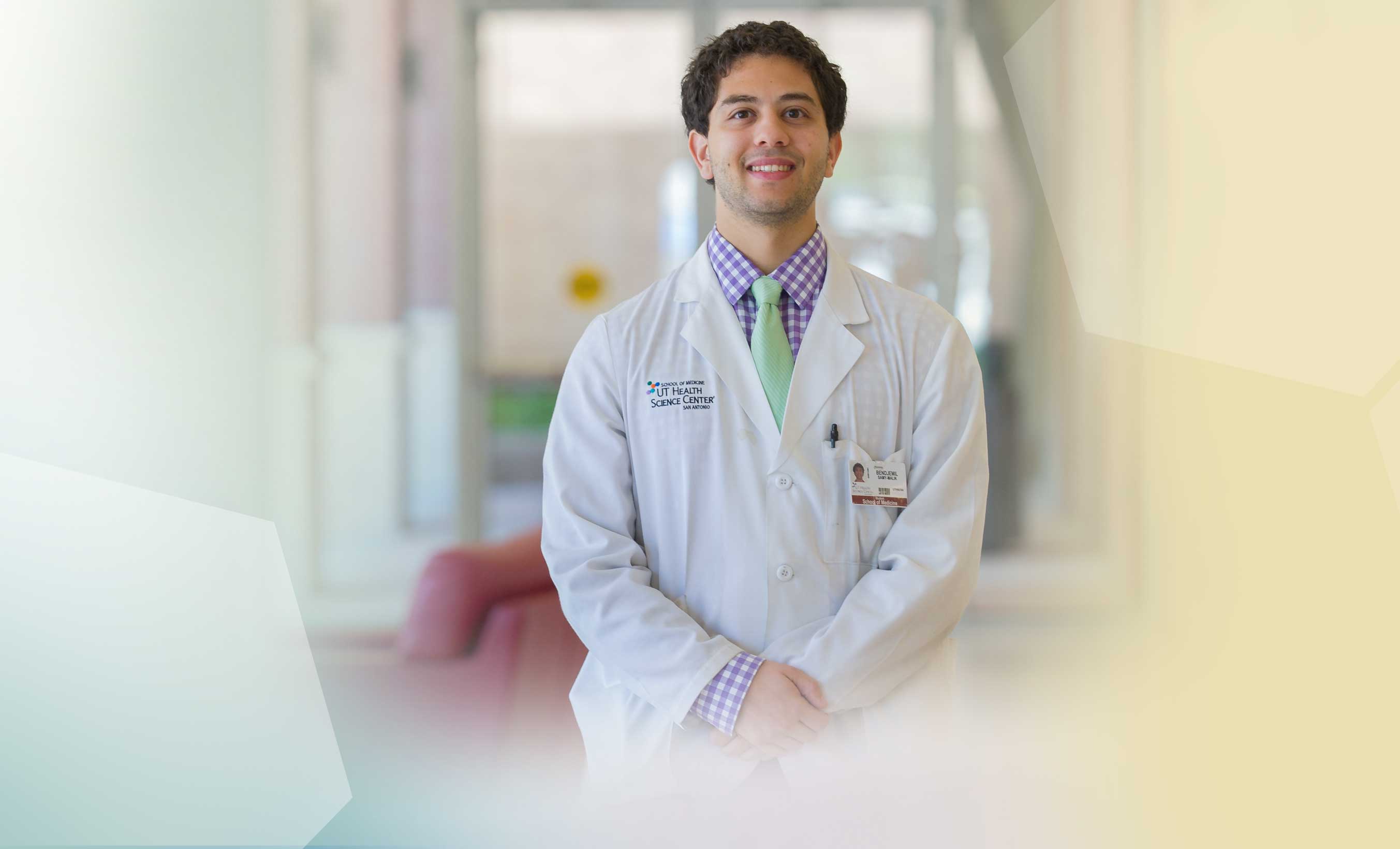 Samy Bendjemil, an M.D./M.P.H. student at the UT Health Science Center San Antonio, has always thought globally. He was born in Canada to a mother from Mexico and a father from Algeria. His father’s career as a chemical engineer took the family to Sugar Land, Texas, a suburb of Houston, where Bendjemil grew up.

“Because of my parents, I had the opportunity to experience numerous cultures in different countries. I got a unique perspective because I didn’t go as a tourist. I learned empathy by going to different countries and staying with local residents,” he said.

While traveling as a youngster, Benjemil saw firsthand the lack of basic human rights – food, housing, education and access to medical care – experienced by people around the world. This experience was the impetus for his community service work that began in high school.

“I have always been drawn to finding a solution to a need in the community,” he said. “In college, I had a friend whose mother received an organ transplant. I saw there was no organization dedicated to organ donation awareness and promotion so I decided to start one.”

Bendjemil said he began his undergraduate education with no intentions of going to medical school. During his sophomore year, he decided he wanted a career that could go hand in hand with human rights, and he began exploring medicine.

After graduating from Texas A&M University with a bachelor’s degree in biomedical engineering, he decided to attend the UT Health Science Center. He began working simultaneously on a medical degree and a master’s degree in public health.

“I decided the M.P.H. would be a great addition to a medical degree. With medicine, you help one patient at a time. With a background in public health, I also could focus on community health with an emphasis on disease prevention and health promotion,” he said.

His interest in global health led him to the General Assembly of the International Federation of Medical Student Associations in Mumbai in August 2012. At the assembly, he met Dr. Moumini Niaone, a physician with family in Burkina Faso, a West African country north of Ghana.

“We talked about the health conditions in his country, and the effects that poor sanitation practices and a lack of education have on the burden of disease,” Bendjemil said. “I was deeply impressed with Dr. Niaone’s selfless devotion to the future of his country and was inspired to develop a health education program for his village.”

Last November and December, Bendjemil unveiled a global health education program in Dierma, a rural village of 3,500 in Burkina Faso. With guidance from Ruth E. Berggren, M.D., director of the Center for Medical Humanities & Ethics (CMHE) at the UT Health Science Center, and Jason Rosenfeld, M.P.H., an assistant director at the center, he collected baseline data on hygiene and sanitation practices through a survey. He also learned about the culture and met with village leaders, including the chief of the village.

During his time in Dierma, he found community leaders and members motivated to learn how to reduce the incidence of preventable disease.

“They live each day with a lack of access to clean water and a tradition of poor sanitation, hygiene and disease prevention. Malaria is the No. 1 cause of death. More than 7 percent of children under age 5 die from preventable diseases,” he said.

After his first trip to Burkina Faso, Bendjemil applied for a Fulbright U.S. Student Award to fund the development of the health program in Dierma. He was recently selected as a recipient.

Bendjemil, who will take a break from his studies between his third and fourth years, travels to Haiti in June with Rosenfeld to gain field experience with existing community health clubs. He heads to Burkina Faso in August to meet with Dr. Niaone and other leaders to discuss the project curriculum. In September, he begins developing and instructing community health club trainers. The program will be implemented through June 2015.

“By completing this project, I hope to serve a developing community and gain skills and experience I will need to organize similar endeavors during a career that I intend to devote to the advancement of global health,” he said.

They live each day with a lack of access to clean water and a tradition of poor sanitation, hygiene and disease prevention. Malaria is the No. 1 cause of death. More than 7 percent of children under age 5 die from preventable diseases.
Samy Bendjemil, M.D./M.P.H. student