"Like the candle that lights our path," the man who helped envision a medical school on the site of a former dairy farm in northwest San Antonio is still working to help future doctors become the best in their fields.

Each morning at the UT Health Science Center brings the arrival of Marvin Forland, M.D., MACP. He steps into the library and heads toward the door beside his portrait. Entering his office, he sets his open briefcase behind his desk and turns his attention to working toward the greater good of the university – as he has done for 46 years.

Much has changed since 1968, when Dr. Forland left the University of Chicago to help start a new medical school in San Antonio on the site of a former dairy farm. The UT Health Science Center’s first graduating class had 33 students. Today, it enrolls more than 3,000 students in five schools. An entire campus – now one of eight in four cities – has sprung up around the original medical school. The university’s reputation has grown, along with the quality of medical care in San Antonio.

But one thing has not changed: Dr. Forland – now an 81-year-old emeritus professor volunteering his time – goes to work every morning.

“This is what I like to do,” he says simply.

Tireless in retirement, Dr. Forland continues to innovate as he closes in on five decades with the UT Health Science Center. In recent years, he has been instrumental in the creation and development of the Center for Medical Humanities & Ethics, which teaches ethics and professionalism while nurturing empathy and humanitarian values.

An avid reader since childhood, Dr. Forland found himself drawn to books that glamorized medicine: Arrowsmith, The Citadel, and Microbe Hunters among them. He also greatly admired several of his friends’ fathers who were physicians.

“As I proceeded in school, it was quite clear to me that I was more interested in a caring profession rather than an entrepreneurial profession, and I found that I like sciences as well as literature,” he recalled in a videotaped 2010 interview. “I thought that medicine would satisfy most of these interests.”

After graduating from Colgate University, he completed medical school at Columbia University and residency at the University of Chicago. Two years of volunteer military service brought him to Fort Sam Houston’s Surgical Research Unit. Discovering that he was the only nephrologist in San Antonio, Dr. Forland volunteered at what was then Robert B. Green Memorial Hospital downtown.

When his military service ended in 1964, he joined the faculty of the University of Chicago and met and married his wife, Ellinor. A few years later, he was invited to return to San Antonio to help start a new medical school and develop a program in kidney disease. In 1968, he returned to San Antonio for good.

Initially chief of the renal disease division, Dr. Forland helped initiate the new curriculum and the hemodialysis, kidney biopsy and transplantation programs at the medical school and affiliated hospitals. He rose through the ranks, becoming the School of Medicine’s associate dean for clinical affairs.

Whether working across departments, institutions or the community, Dr. Forland became known for his collaborative spirit and sound advice, traits still very much evident today.

“I think my major contribution, perhaps, has been as a communitarian, trying to engage and work closely with others in whatever area of responsibility I was asked to undertake,” Dr. Forland said.

“The Candle That Lights Our Path”

Medical ethics has been taught at the School of Medicine since its inception, but ethics discussions had long relegated to the final months of medical school, when students’ minds were on their residencies. As associate dean, Dr. Forland sought to give ethics more prominence, with limited success.

Then, at retirement, Dr. Forland captured the imagination of then-School of Medicine Dean Steven Wartman, M.D., Ph.D., who proposed a combined program in medical ethics and humanism. With support from President Francisco Cigarroa, M.D., the Center for Medical Humanities & Ethics was born in 2002 and up-and-coming author Abraham Verghese, M.D., recruited as founding director.

Dr. Forland remains closely involved with the Center he helped conceive, sharing his wisdom first with Dr. Verghese and now with Ruth Berggren, M.D., who assumed the directorship in 2007.

“Dr. Forland is like the candle that lights our path and a driving force behind everything our Center does in preparing tomorrow’s healers to act with compassion and justice,” Dr. Berggren said.

Dr. Forland describes three priorities that have shaped his career: delivering quality health care, expanding the availability of care and enriching the medical school experience. The Center, he says, combines all three.

“It dazzles me, the range of activities that Dr. Verghese, Dr. Berggren and associated faculty and staff have been able to build here,” said Dr. Forland, citing the use of humanities, Community Service Learning and global health in addition to traditional ethics instruction. “It far surpasses our initial plans.”

I think my major contribution, perhaps, has been as a communitarian, trying to engage and work closely with others in whatever area of responsibility I was asked to undertake.
Dr. Marvin Forland, founding faculty member of the Health Science Center 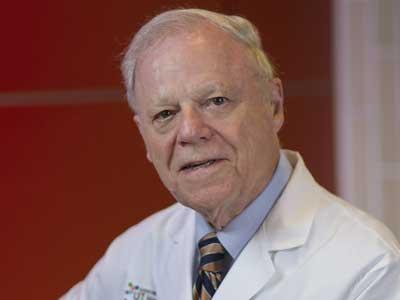