Preparing patients, caregivers for the journey

Carlayne E. Jackson, M.D., FAAN, and the South Texas ALS Clinic offer hope and specialized care to those diagnosed with Amyotrophic Lateral Sclerosis as well as support and guidance for caregivers.

When she was a junior chemical engineering major at Texas A&M University in College Station, Carlayne E. Jackson, M.D., FAAN, went on a tour of a chemical plant.

“I knew then that chemical engineering wasn’t for me,” she said. It turned out to be a degree she would never use.

As a senior in college, she dated now-husband Penn Jackson, D.D.S., who, at the time was a student in the School of Dentistry. He introduced her to The University of Texas Health Science Center San Antonio. Dr. Carlayne Jackson decided to apply to the Long School of Medicine at the UT Health San Antonio.

Although she began medical school with a general interest in medicine, her favorite rotations during her third year were neurology and rehabilitative medicine, she said.

Dr. Jackson remained at the Health Science Center to do her residency in neurology and fellowship in neurophysiology. She now serves as a neurologist and chief medical officer of UT Health San Antonio, the clinical practice of the Long School of Medicine.

While doing her residency, she had her son, Christopher, who was born with a chromosome deletion. “He needed to see a pediatric gastroenterologist, neurologist, physical therapist, occupational therapist, speech pathologist and other specialists.

“I lived the experience of my son having very disjointed care. The specialists were all over the city and at his school,” she said. “It was hard on him and on me to get him everywhere he needed to go.”

Creation of the ALS clinic

Dedicated to patients who have been diagnosed with Amyotrophic Lateral Sclerosis and their families and caregivers, it is one of two such centers in Texas and only 34 in the United States.

“Because of Christopher, I wanted to create a clinic with all the resources in one place. I wanted a clinic that would help the caregiver – not just the patient,” she said. “My son had a feeding tube and other interventions that my ALS patients have. I have been through what they are going through.”

A clinic for patients, caregivers

Dr. Jackson, also a professor of neurology at the UT Health Science Center, said the clinic is designed so the patient and caregivers remain in an oversized exam room while specialists take turns coming to see them.

“We believe it is important that the specialist is able to visit with the patient and his or her caregivers at the same time. Most of the time it is the caregiver who does all the things that can improve the patient’s quality of life,” Dr. Jackson said.

The majority of patients and their caregivers come to the ALS clinic every three months on a Wednesday afternoon. She stressed the importance of getting such specialized care as soon as possible after diagnosis.

“The average delay in diagnosis is approximately one year. I have seen patients who were originally misdiagnosed and underwent procedures that were not needed,” she said. “With an average life expectancy of two to five years after onset of symptoms, time really is of the essence. We can improve and extend quality of life.”

On average, fewer than 5 percent of ALS patients participate in research trials, said Dr. Jackson, who serves as the principal investigator on pharmaceutical and symptom intervention trials.

“The research trials provide hope for the patient. While some of the research may not help them, they know that what they are doing could help others diagnosed in the future,” she said.

Now known across the country as an expert in ALS treatment and research, Dr. Jackson said she is proud that her clinic team is committed to preparing patients and caregivers to deal with ALS.

“We do not want anyone to feel alone on this journey,” she added.

We do not want anyone to feel alone on this journey.
Carlayne E. Jackson, M.D., FAAN 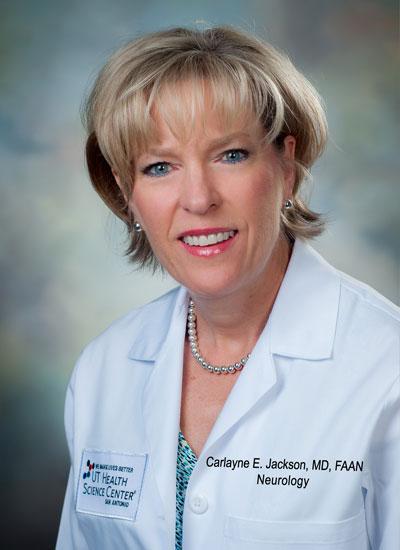